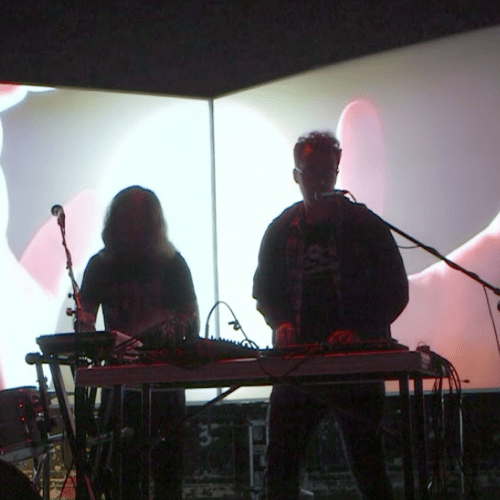 For NPR’s “Where Will You Find Your Next Favorite Band” feature, radio jockeys from around the country were asked to select an up-and-coming act poised to break out in 2012. WNYC Soundcheck’s John Schaefer threw his two cents behind New York’s own Tiny Victories, saying there is “a natural, organic feel to the music despite all the samplers and electronics.” In the band’s new clip for “Mr. Bones”, you can see and hear exactly what Mr. Schaefer is talking about.

Musically, “Mr. Bones” builds up layers with surprising grace – island percussion, to chiptune shimmers, to clap-beckoning bass, to uplifting synths coming in one at a time to construct a beatific dancer. The Brian Bowman-directed clip follows a similar path upward. Images of a woman starting her day (note: I want that ocean projection over my bed) are juxtaposed with a waking world and Tiny Victories setting up their equipment. As the duo gets going, a party grows up around them, with everyone getting in on the fun. Join the party by watching below.

“Mr. Bones” comes from Tiny Victories’ debut EP, Those Of Us Still Alive, available now through the band’s Bandcamp.