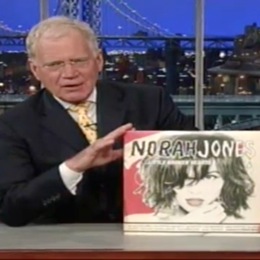 It’s hard to tell sometimes if David Letterman is actually being earnest, but regardless, he’s superb at giving glowing endorsements. ”We love having this woman on the program,” Letterman stated, while holding up Norah Jones‘ latest LP, Little Broken Hearts. “She is a nine time Grammy award-winning singer-songwriter. Nine times! I haven’t won anything.” Shortly after, Jones cheered up the late night host by performing a rather buoyant cut of “Happy Pills”. We’ll go ahead and say he’s a true fan, especially given the way he joked around with the singer after the performance. “Oh my god, don’t press that button,” he exclaimed, pointing to a pedal on her keyboard. “I’m begging ya.”

Prior to the performances, Jones delivered an hour-long performance at the Ed Sullivan Theatre as part of the Live on Letterman webcast series. You can replay both the TV performance and webcast below.