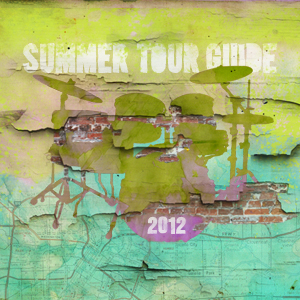 Consequence of Sound’s Summer Tour Guide will lead you to the darkest, dankest (not every venue has a ventilation system, folks) concerts where you can dance the night away after spending too many hours in the sun. From Dirty Projectors to Phish to the Diplo/Grimes/Skrillex extravaganza that is the Full Flex Express, we’ve listed the best and brightest artists that are touring new or as-of-yet unreleased albums, touring around festival appearances, or just touring because it’s damn fun.

What CoS Says: Baltimore dream-pop duo Beach House are supporting their expansive, haunting new LP, Bloom, and the floating, wonder-drenched tunes therein will echo majestically through many concert halls. The disc is likely to hit at or near the top of many best of the year lists, and this will be your chance to see things unfurl in person. –Adam Kivel

What CoS Says: Dirty Projectors may have produced their masterpiece on 2009’s Bitte Orca, but on this tour they’ll be playing tunes from their first attempt to top that, Swing Lo Magellan. The early sounds from the disc suggest we’re in store for more hocketing and other multi-part vocal insanity that needs to be seen produced live to be believed. –Adam Kivel

What CoS Says: After drawing eyes and ears from critics everywhere at this year’s South by Southwest, Fiona Apple hit the road for a select number of intimate gigs, all to critical acclaim. Most reviews championed this unspoken, newfound energy in her performances, where she twisted and turned some of her older tracks like “Criminal” or “Extraordinary Machine” into urgent personal affairs. With her forthcoming LP – The Idler Wheel... – due out June 19th, Apple will have plenty to get off her chest once and for all. In other words, expect something emotional. -Michael Roffman

What CoS Says: If Grimes is Janis Joplin, would Diplo or Skrillex be Jerry Garcia? The comparisons might not be entirely fitting, but either way, this bumpin’ tour featuring three of the best beat-making songwriters in the game today might just give the original Festival Express a run for its money. –Harley Brown

What CoS Says: Leaving longtime label DFA doesn’t seem to have put a crimp in Hot Chip’s high step, if their dance-tastic new cuts are any indication. Close to the release date of In Our Heads, this extensive summer tour provides the first chance to hear the fivesome’s fifth installment of technolectronica hot off the vinyl presses. –Harley Brown

The Into The Wild Tour

What CoS Says:  All four guys guest on the majority of each other’s tunes so I feel bad for them on this tour — no one’s going to get a break for too long off stage before they have to come and guest on another verse. Bad for them trying to read a book backstage, but incredible for the audience who are sure to see “Tougher Colder”, “Hail No”, “Butane”, and possibly “The Last Huzzah”. Also, do play the “What liquor will eXquire’s crew spray on the crowd?” betting game for kicks! –Jeremy D. Larson

What CoS Says: A Japandroids show is essentially that feeling of screaming yourself hoarse to rock music in your car with the windows down and the radio cranked to the max, only everyone at the show is doing that and you’re all on the same page because Japandroids make you feel young again, dammit. Help out Brian King and David Prowse with those “Ohhhs”from the back of the club — you won’t be the only one. -Jeremy D. Larson

My Morning Jacket and Band of Horses

Who: My Morning Jacket and Band of Horses

What CoS Says: Ask anyone who’s seen them live (Bonnaroo 2008, anyone?): My Morning Jacket is hands down one of the best contemporary live acts on the circuit(al). Band of Horses, who opened MMJ’s MSG show in December, are hard at work on new material with the legendary Glyn Johns. Put the two acts together, and you’ve got a southern rock fan’s wet dream. -Ben Kaye

Support: Only our resident Phan, Rob.

What CoS Says: Bust out the tape recorder and Grateful Dead bong, Phish is hitting the road again this summer. The Vermont jam gods are slotted to headline Bonnaroo alongside Radiohead, marking the first time Thom Yorke will have ever smelled Patchouli. –Bryant Kitching

Who: Refused and OFF!

What CoS Says: It’s been almost a decade and a half since Refused toured America, and that ended with the police breaking up a Virginia basement show. No one ever thought their classic The Shape of Punk to Come: A Chimerical Bombination in 12 Bursts would see the light of a stage again, but after an appearance at Coachella, fans across the map have a chance to witness the songs in all their glory. The fast and furious kick-assery of punk supergroup OFF! is just the sweetest icing this reunion cake could have, so eat up. -Ben Kaye

What CoS Says: It’s been four years since the Icelandic export hit the States. That’s a long time for an act as sweeping and majestic as Sigur Rós to be off the map. But, with time comes reason, and their latest album, Valtari, is an agreeable excuse to trot around the globe. The LP expands upon their sound in dense, circuital ways; as a result, the band will come stocked with an arsenal of new melodies and emotions to levitate that heart of yours into any summer night. Actually, it might be the only festival act that has you packing tissues. -Michael Roffman

What CoS Says: Sleigh Bells have come a long, loud way since Treats, building a stadium-sized sound behind their Top Star-earning Reign of Terror with their trademark wall of Marshalls. Good thing as they get bigger, they also get better, so be sure to catch them while you still can. –Harley Brown

System of a Down with Deftones

Who: System of a Down and Deftones

What CoS Says: With System of a Down fresh off a five-year live hiatus and Deftones gearing up for a new album, this is a prime double-header. In fact, there’s no better bill this summer for anyone who likes their rock hard, loud, and fist-pumpingly furious – and who doesn’t? –Ben Kaye

What CoS Says: With no new album to tour behind (they trekked across the globe for most of last year in support of their eighth LP, The Whole Love) you can expect Tweedy & co. to pull out some deeper cuts this time around. Our fingers are crossed for either “Kingpin” off their 1996 folk-rock opus Being There or “I’m Always In Love,” the unsung hero off 1999’s Summerteeth. –Bryant Kitching