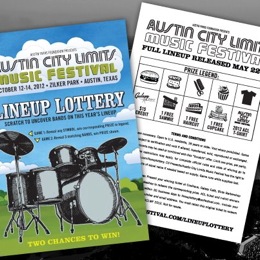 For the second consecutive year, Austin City Limits will reveal a portion of its lineup through a “lottery.” As the festival’s website notes, scratch cards will be placed in various Austin establishments over the course of the next four days. At least five acts will be revealed each day, with each card containing the names of three acts (a card containing three matching names wins a prize!)

We’ll be keeping track of the results below and will post a formal lineup when the official announcement is made on Tuesday, May 22nd.

1. Iggy and the Stooges