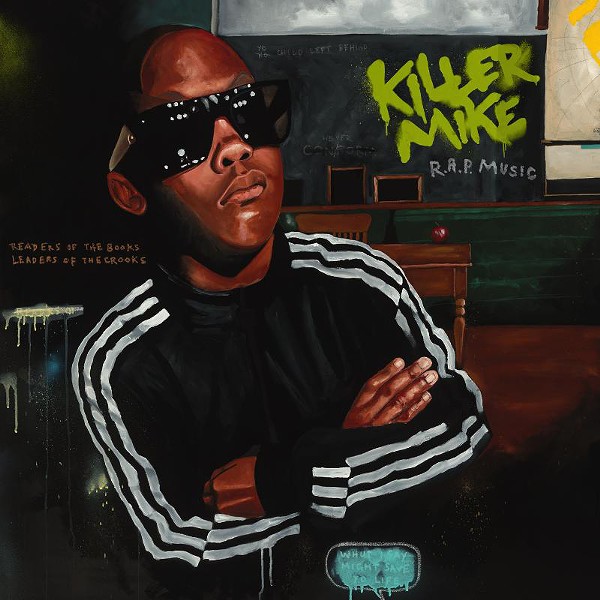 From It Takes a Nation of Millions to Hold Us Back to Young Jeezy’s “My President Is Black”, political hip-hop has long been a dicey proposition for consumers. Some find the subgenre downright empowering, capable of attaching concise near-sloganeering to ideas that might need a little more forthrightness for maximum effect (think “Fight the Power”, obviously). Others, especially those keen on the beats and escapism of some rap, brand it insufferably in-your-face and prolix. With Killer Mike, both types of listeners can find solace, as the Atlanta denizen keeps his zeal on an even keel by slipping the right amount of nonpolitical content into his husky flow and inventive rhyme patterns. In essence, he’s an everyman’s MC, with a gift for rhetoric that has no compatibility issues with songwriting.

R.A.P. (Rebellious African People) Music is Mike’s sixth album, and Mike’s hailed it as his best one yet. It is. Tapping abstract ex-Def Jux savant El-P for the entirety of the record’s production, the whole thing feels audacious and downright important, at least for the sake of some urban, disgruntled-youth populace out there. Erudite without being overwrought and passionate without being dogmatic, what we’ve got here may be the best rap album of the year – at least, so far.

At any given time, Mike has a lot on his mind — he commonly gives long-winded responses to a single interview question. Mike divulges his opinions on disparate sociopolitical issues, past and present, with more fervor here than ever. On “Reagan”, he goes in on every POTUS since the titular one: “Ronald Reagan was an actor/Not at all a factor/Just an employee of the country’s real masters/Just like the Bushes, Clinton, and Obama/Just another talking head telling lies on teleprompters.” With “Don’t Die”, it’s police brutality: “[The cop] said, ‘Chill or we kill — this is a warning’/Then I told him, ‘Fuck you, where is the warrant?’/Then they got to punchin’ and kickin’ and macin’/Then the whole situation went Larry Davis.” The meaning of “Conscious rap” is fuzzy, but under just about every definition, R.A.P. Music fits that bill and is better for it — even the references to DalÃ­ and Basquiat feel proper, natural, opportune.

And then there’s El-P. From his early work with Company Flow to his masterful new Cancer for Cure, the beatsmith born Jamie Meline has assembled legions of quirk-rap weirdness that feels like a genre unto itself. With R.A.P. Music, El brings his Big Apple idiosyncrasies to Mike’s ATL strut, resulting in beats that feel far from provincial yet vital in how now and emphatic they sound. With the T.I.-, Bun B-, and Trouble-featuring “Big Beast”, far and away the most confident rave-up here, the opening lone synth stabs fluidly erupt into a menacing wall of loud. On “Southern Fried”, bass ripples and choppy guitar chords are processed into a lightning-paced track that matches the cool of the chorus: “Ain’t I fresh? Ain’t I clean?/Ain’t I ridin’ through the city in the meanest machine?” No doubt El Producto pulled out all the stops for this one, and the chemistry between producer and rapper is uncanny (however unlikely it might seem on paper).

What ends up being the most enticing thing about R.A.P. Music is that it’s the first instance of Mike putting out an end-to-end great album. On the closing, triumphant title track, Mike works in a who’s who of musical R.A(-merican).P.: Robert Johnson, Outkast, Curtis Mayfield, Coltrane, George Clinton. More than anything he’s done prior, the album feels like a singular document destined to juxtapose him with those legends. You’d be foolish to miss it.