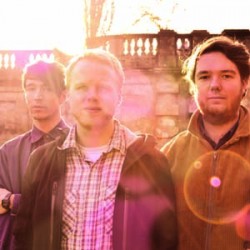 We first knew singer Hugo Manual as Chad Valley before he caught our ear with his full band, Jonquil. The Oxford, U.K. outfit’s latest album, Point of Go, is an exercise in “pure indie pop sunshine,” and they’re supporting the release by touring with Greece’s loungey dream-pop duo Keep Shelly in Athens. The bands got on like Nutella and peanut butter (note: well), leading to KSiA remixing Jonquils latest single, Run.

At first listen, the remix feels like a wholly different song. At second listen, it still feels that way. Theres about a minute and a half where the original is plainly evident, even with Manuals lyrics almost entirely pushed down. Listening carefully to those undulating, spacey synths and the ticky-ticky drums filling the rest of the track, however, reveals Runs instrumentation slowed, chopped, and molded into one entrancing remix. Check it out below.

Jonquils Point of Go is out now on Dovecote Records. Keep Shelly in Athens most recent release, Campus Martius E.P., is available via Planet Mu.