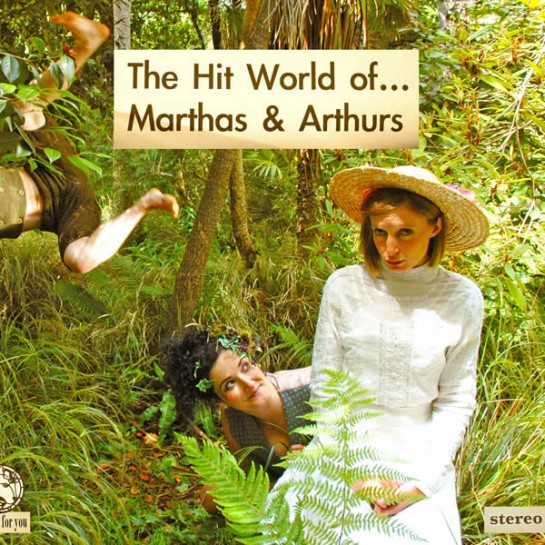 Marthas & Arthurs are a co-ed quartet from London who mix the playful folk of The Ditty Bops with the light, orchestral pop approach heard on Belle & Sebastian’s The Life Pursuit (an even more appropriate comparison given the primarily female vocals would be Stuart Murdoch’s B&S offshoot, God Help The Girl). Top it off with a good sense of humor and a kooky cover that looks like it could be an alternate ending to Picnic At Hanging Rock, and you’ve got one of the more fun and unusual acoustic records of the year thus far.

The band has garnered more than a few comparisons to the Mamas & the Papas, in part due to their retro presentation but more a result of their beautiful boy-girl vocal harmonies. These are best displayed in “Barberosophy”, a nearly a capella song— chirping birds are the only sound beyond their voices— sung in round, building to a powerful crescendo. The comical “Who Will Marry Me?” begins “sitting on the loo/thinking of the things you wish you had the balls to do”, and heads into a chorus packed with surreal imagery, from fish-filled trees to primates flying aeroplanes. The album’s topped off by a brilliant cover of The Stone Roses’ “Shoot You Down”, which transforms the original song’s smug bite into a gorgeous ’60s AM radio soft rock number, complete with a rhythm section of snapping fingers.

At times, the lyrics can be a little too silly. (Example: “Ape on a train/She’s called Jane/Wearing pretty clothes/Some of them don’t go/And her clothes are stole,” in “Ape On A Train Called Jane”.) Still, Marthas & Arthurs have an absolute charm about them, even in the goofier songs. As a result, The Hit World Of… Marthas & Arthurs is an unexpected and lighthearted treat.

Essential Songs: “Shoot You Down”, “Who Will Marry Me?”, and “Barberosophy”