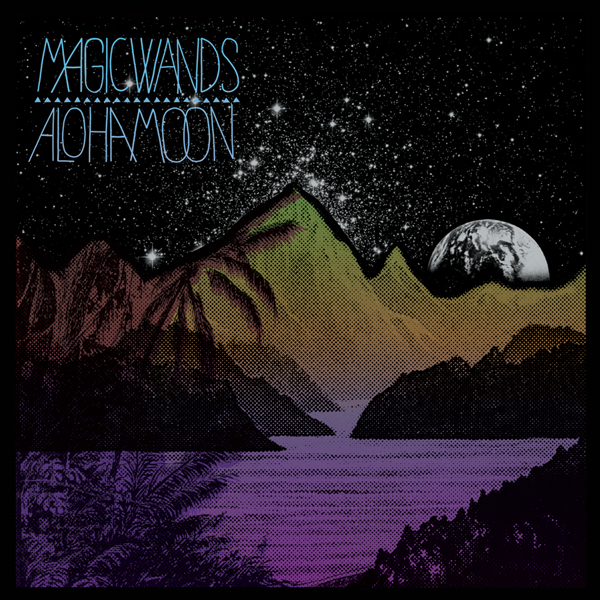 For a duo that’s opened for such acts as The Kills and The Horrors, it’s not hard to trace Magic Wands’ darker undertones lurking beneath their glitzy, nighttime hooks back to such pseudo-gothic bands. On Aloha Moon, the first proper LP from Chris and Dexy Valentine, they teeter on the brink of shoegaze, but not quite – their larger interest in sultry mood and rhythm make this an overall impressive debut.

Magic Wands’ video messages to their fans online are astonishingly low-key, with light flares and Ray-Bans abound, and for a group as cheeky, however ironic or not, to dub their own sound as “lovewave”, some judgments might come flying before actually listening to the stuff. Sure, Aloha Moon is a pop record in the strictest sense, but it has the deceptively astral chops to stand behind with School of Seven Bells’ and Drowner’s releases from earlier this year as a lighter palette cleanser. Magic Wands also operate as a slower, gauzier Metric, but they’re an act finding their way and having a fun, smooth time doing it.

After 2009’s Magic Love & Dreams EP, the Valentines no doubt sought to refine their recording chops and take some hints from the big-name acts they toured with, and several songs reappear here in superior form. “Teenage Love” is blunt in its analogies, but it does the job, while “Crystals” is a stand out, an upbeat track with a brief, cutting guitar line alongside synths and clicking percussions filling the whole thing out. The hipster lounge music of the opener and the out-of-place distortion of “Kiss Me Dead” are small blights, but “Warrior” keeps up the duo’s slick-as-hell attitude, and the beauty of it is letting Dexy’s cozy voice ooze around you. While the single “Black Magic” has been around for a bit, it finds a perfect home here, with a poppy catchiness mixed with a leering, gossamer quality.

Chris and Dexy may be firmly located in Nashville for the time being, but their sound yearns for those Pacific nights, with a hazy moon illuminating San Francisco Bay. It’s going to take a bit more than sparkles and glitter, though, to propel their intelligently crafted dream-pop a bit further.