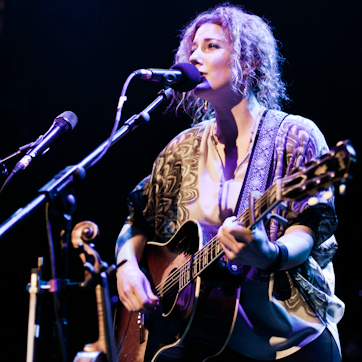 Canada Day came to North London four months early as Kathleen Edwards and her band of compatriots, including tour support Hannah Georgas, hit town. Among plus points, the 800-capacity O2 Academy Islington harbors the kind of oddities you half expect from a London venue. A civilized entrance gives way to a tidy, well-kitted-out interior. The main room ceiling is then a baffling labyrinth of exposed pipework and aircon, suggesting the work of a spaced-out engineer. Above there is a sizeable mezzanine floor yet with minimal room for people to actually view the stage below. Tonight the venue is suitably rammed, but with fiftysomethings there in numbers, its also a place where people stop to let you pass on the stairs. Yet even those without physical hair to let down were clearly up for a good time, and in that respect, the evening certainly dealt trumps.

The night kicked off with a set from Hannah Georgas, though I unfortunately only have that as hearsay thanks to the infamous London traffic. The singer-guitarist-songwriter then doubled as Kathleen Edwards backing singer, stepping out of the back line to duet with Edwards on a cover of Alex Chiltons September Gurls during the encores. The softer harmonies of Georgas blended really well with Edwards shriller tones throughout, but there was no doubting who was in charge.

Wearing a peacock feather print top over rock chick tight jeans and boots, Kathleen Edwards took the stage with swagger, her hair an increasingly unruly tousle of blonde corkscrews. She opened with the first two cuts from her new album, Voyageur, each taking on added energy in the live arena. Edwards has a steely personality and a sense of purpose about her but also lays her heart open in a remarkably candid fashion, becoming tearful during an emotive rendition of House Full Of Empty Rooms and preceding it with a eulogy about the value of having somewhere to call home. While that came halfway through the set, the affection of the crowd, and no doubt its size, prompted earlier flurries of thank yous from Edwards and even a wish in hindsight not to have been quite so public in sharing her “shit” on the latest record.

Edwards divorced her husband and musical collaborator Colin Cripps last year–a breakup referenced by several of the Voyageur songs. In the admirably named Gord Tough on lead guitar, she has found someone to truly feed off–an eloquent player who shone all evening with his sinewy solos and muscular counterpoints. Jim Bryson on keyboards and guitar along with John Dinsmore on bass and Lyle Molzan on drums completed a tight and nimble lineup, giving Edwards songs full rein without compromising the power of her vocals. Mixing almost the entire new album with tracks from her previous three, Edwards ably demonstrated the depth of her songwriting and passion of delivery. She had an appreciative audience in her hands with the more immediate stuff such as the fast-paced rocker Back to Me and the poppy Sidecar getting a big response, while Toughs brilliant soloing on the emotive Goodnight, California was another standout.

There was a particularly tender interlude as Edwards delivered a solo version of Hockey Skates from her 2003 debut, Failer–the artist showing her mortality with a bum guitar note at the end greeted with love and laughter by all. For me, though, nothing surpassed the consummate balladry of A Soft Place to Land with its rises and falls dynamically interpreted by the band, which included Edwards herself switching from violin to guitar and back. Even a misbehaving keyboard during Change the Sheets failed to spoil the party, even though the Justin Vernon-inspired finesse of the studio version was lost. Kathleen Edwards overriding quality is that of connecting with an audience lyrically and musically–a truly expressive performer who acts out her emotions as she sings. It can be quiet, it can be loud, but its always for real.