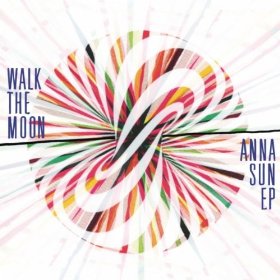 Already heard Cincinnati synthpop band Walk the Moon’s “Anna Sun”? Then you generally know what you’re in for with the Anna Sun EP’s title track. But harken! It features a new, sinewy mix of the song with two killer new jams, “Tightrope” and “Next in Line”. They’re both off Walk the Moon’s forthcoming full-length, a major-label debut with RCA Records.

The pressure’s on for Walk the Moon, four enthusiastic, sweet-natured twentysomethings riding the crest of the “Anna Sun” wave to their biggest exposure yet. Case in point: MTV named Walk the Moon an “Artist to Watch for 2012” in January, alongside blog-hype staples A$AP Rocky, Frank Ocean, and the infamous Lana Del Ray. It’s mostly due to “Anna Sun”, which was inspired by lead singer/keyboardist Nicholas Petricca’s studies at the prestigious, liberal arts Kenyon College in the tiny, bf-nowhere town Gamier, Ohio. The make-your-own-fun freedom of his small-town college experience inspired “Anna Sun”. Ah, the reckless fun of summer break it evokes.

But the passage of time always proves chilly to buzz bands like Walk the Moon. For a hard-touring, young, energetic band with fleeting cache, it sure has been taking its sweet time with an earnest studio follow-up since 2010’s i want! i want!. So, the Anna Sun EP feels like a necessary stopgap.

The EP’s “Next in Line” and “Tightrope” don’t equal the elated catchiness of “Anna Sun”, but they do rival it. “Tightrope” sounds as taut as its title suggests, with intermingling bass and synth lines and squealing guitar stabbed through their center, suggesting Television on a playground with Talking Heads and Tom Tom Club.

The New Order/Depeche Mode synth modes of “Next in Line” lend themselves well to its lyrics’ joyous contemplation of anticipating The Next Big Thing. Not the band’s role in music, so much, but in the band members’ lives. The two seem parallel for the band, which breathes so much sincerity into the Anna Sun EP that you’d think they were channeling Ann Margaret in Bye, Bye Birdie.

“We’ve been waiting, but we’re next in line,” Petricca sings. They may just very well be. But what happens to them when they get to where they want to be is up to them.