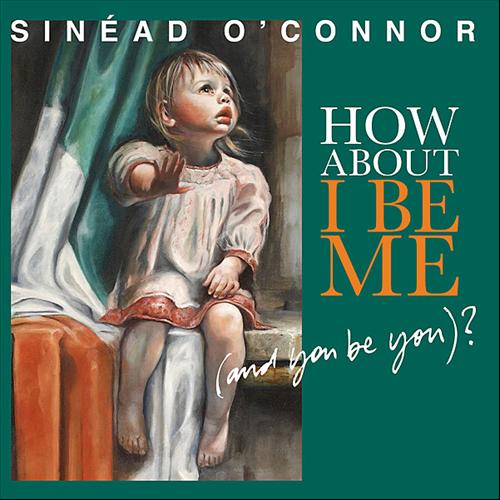 A veteran of four weddings, 45 years, and enough emotional baggage and controversy to last twice that long, Sinéad O’Connor returns with her first release in five years: How About I Be Me (And You Be You)?. The title may not exactly roll off the tongue yet it neatly sums up what the record and the lady are about. O’Connor’s often confrontational stance with both public and media has rarely worked in her favour during her musical career so maybe it’s time for her to be left to be herself. And let’s all go away and accept that.

The rage at perceived injustice is still here yet some signs that age and experience have mellowed O’Connor. There’s a smattering of romantic songs along with pain, regret and, not least, vitriol aimed at a familiar target of hers, the Catholic Church. Viewed as a whole the album forms an impressive collection of songs and moods, but taken in sequence it doesn’t quite knit together. It’s a stop/start ride that carries you from the light and fluffy to the deeply sonorous. Interestingly the love songs are a coincidental celebration of her recent marriage as they were written between 2007-9 when the singer was with her previous partner. They reveal rather her strong need to love and to be loved.

The opener, “4th And Vine”, is a lightweight ditty set to an infectious shuffle beat. O’Connor looks forward to dressing up in pink and putting eyeliner on like she’s turning the clock back to a rosy bloom of youth. OK, some sentiments are trite and seem to belong to a much younger girl (“Not that he’s no wuss/Girls you know his love is serious”), but it’s difficult to stop the tune rebounding around your brain. As powerfully emotive as the next song is, to follow this with the darkly chilling “Reason With Me” dealing with drug addiction and the imperfect hope of redemption is a bit too much of a contrast.

And so it goes through the record. The rocky “Old Lady” in which O’Connor relives an old girlish crush is followed by her tirade against Catholic denial in “Take Off Your Shoes”. A saving grace, however, is that wherever the mood takes her, O’Connor’s vocals remain fine throughout. That breathy quality that mixes a raw edge with crystal clarity, power with silkiness is ever present. She can turn the volume on and off with precision. This is best illustrated on O’Connor’s cover of John Grant’s “Queen Of Denmark”. The song could have almost been written for her and she spits out the anger of a lover’s scorn without compromising the dark humour of Grant’s own words.

Elsewhere on the remaining self-penned songs, O’Connor embraces country sensibilities in the gentle, lolling “Very Far From Home”, her take on the downside of a musician’s life on the road, while the eulogy “Back Where You Belong” handles the subject of a family death with rare tenderness. The soft pulsing electronica of “I Had A Baby” provides a backbeat to the aftermath of paternal rejection beside the actual birthing. The most commercial song is undoubtedly “The Wolf Is Getting Married”, so titled as it cites an Arab expression for a break in the clouds O’Connor first heard from a taxi driver: “The wolf’ smiles as he’s on his way to his wedding.” O’Connor has taken that oddly poetic idea and woven a joyous celebratory song around it destined to be on many wedding singers’ request lists. The melody lines may be familiar but from the muted keyboard opening to the ringing guitars it’s a perfectly crafted pop song.

The album closes with “VIP”, a hymnal that makes for uncomfortable listening. A scarcely veiled attack against Bono and targeting inertia amongst her fellow Irish artists faced with Catholic hypocrisy, O’Connor’s overriding need to express her strength of feelings at any cost gets the best of her. Elsewhere, long-time producer and ex-husband John Reynolds has rooted much of the recorded sound in early ’90s pop-rock. The contemporary edge is really O’Connor’s and it comes from her drive and conviction, tempered by moments of joy and laughter. You may love or hate the record, but you won’t ignore it.

Essential Tracks: “The Wolf Is Getting Married”, “Queen Of Denmark”,  and “Reason With Me”.