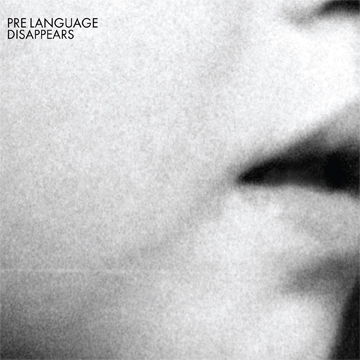 Something that outsiders should know about citizens of Chicago is that everything here comes with a modest amount of fight. Chicagoans have spent years battling against the stigma of “The Second City” and that has made them hardened in battle. Their food is survivalistic nose-to-tail creations, their baseball fans are die hard, and their music – their real music – is gritty and snarling. The independent music scene is born in the beer-stained lofts of the city’s trendy, artsy neighborhoods, and from this scene brews a new brand of grimy rock. At the front of the pack is Disappears and their new album, Pre Language—an echoy, reverbed nightscape of rock ‘n roll energy.

Disappears have created a dark, at times dancey, record that very rarely lets up. From the opening track’s (“Replicate”) low bass line and Cro-Magnon drumming, Disappears remind us how they cornered the market on dark, minimal chord punk rock. Lead singer Brian Case’s somewhat monotone yet energetic vocals throughout the album fit the musical mood perfectly. The instruments and vocals sound like they’re emerging from a dark basement; bouncing off the cement walls like a trashing crowd.

Mid-album track “All Gone White” is a prime example of the murky reverb sound of Disappears. The bass and guitar repeat a bouncing and chugging line while another guitar wails and feeds back under Case’s steely direct voice. It sounds like something that could soundtrack a gritty action thriller (think: a violent, drug-fueled alley fight). In fact, it actually makes me anxious just thinking about it.

For a city used to clawing their way ahead of everyone else, Disappears are the perfect aesthetic for the fight. They were able to bottle the pure raw power of the city on Pre Language, and now everyone else around the world can get a taste.

Essential Tracks: “Replicate”, “All Gone White”, and “Fear of Darkness”