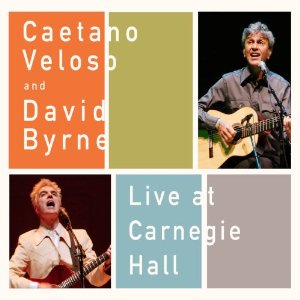 Maybe it’s the staid, revered aura of Carnegie Hall. Maybe it’s that a revolutionary spirit naturally mellows with age. Maybe it’s that music written in the face of an oppressive military regime, in a time of worldwide cultural upheaval, and with the influences of psychedelia, just doesn’t seem as relevant anymore at age 62. For whatever reason, Caetano Veloso‘s performance with David Byrne on the new album, Live at Carnegie Hall, wasn’t quite the mindblowing collaboration it seems like it should be.

But first, a little history is in order: Most Americans of our generation have a vague misunderstanding of Bossa Nova, generally beginning and ending at Ipanema. American culture has turned the genre into a cheesy, borderline sleazy smooth jazz substitute, music for elevators or for waiting on hold. But Bossa Nova was, and still is, one of the most important musical genres in Brazil, fusing the rhythms of Samba with the harmonies of post-Bop jazz.

In the late 60’s, a young generation took what they learned from their Bossa Nova predecessors and turned this music into something powerful and, from the point of view of the oppressive Brazilian military government, dangerous. Dubbed “Tropicalismo,” this new music by artists like Veloso, Gilberto Gil, Gal Costa, and Os Mutantes was revolutionary in sound and content, threatening the government’s nationalist agenda with its rock and funk assimilation, and its socially conscious criticisms of the police state. Musically, it was a wild re-imagining of Bossa Nova, and its mission statement was Veloso’s powerful and trippy “Tropicália“.

Veloso will always embody that renegade, subversive side of Brazilian pop culture. However, for this 2004 performance, he delivered a set that largely retained the sound of classic, pre-Tropicalismo Bossa Nova. Veloso begins the show solo, singing and playing guitar, eventually adding violinist Jaques Morelenbaum and percussionist Mauro Refosco. It’s a choice that certainly fits being in one of the most acoustically ideal rooms in the country. Among these tracks, “CoraÃ§Ã£o Vagabundo” stands out with its haunting guitar and violin tag at the end of the chorus. Veloso’s smooth baritone voice is pure magic, seducing your ears with its gentle effortlessness. But these songs in this stripped-down arrangement seem very “un-Tropicalismo.” Only “Terra”, Veloso’s 1969 song inspired by the first photos of earth from space, seems to break out of the older style, cleverly paired with Byrne’s ballad “Heaven”.

Former Talking Head Byrne joins Veloso onstage for the remaining two thirds of the concert. It’s a combination that might seem odd at first blush, but Byrne has long been a musical chameleon, and a huge fan of Veloso and Brazilian music: just check out this nearly five-hour playlist from 2008. Byrne’s late Heads albums, especially Speaking in Tongues and Naked, include a wide variety of non-American musical influences, and Refosco has been working with Byrne for years.

Byrne’s first work in this show is a mini-set of his tunes arranged for the minimalist acoustic ensemble. Especially perfect on this occasion is his Latin-influenced “God’s Child”, originally written as a collaboration with Selena. While Tex-Mex is about as far as can be from Brazilian, Byrne makes it work, finding an explosive groove at the end that feels natural within Veloso’s light plucking. Other songs don’t quite fit the acoustic treatment, especially the disco rocker “Life During Wartime”. On a few of these tracks, though, Byrne reaches for something extra and knocks it out of the park. “Road To Nowhere”, from 1985’s Little Creatures, is a revelation in this arrangement. Beginning with a constant, galloping staccato guitar, it soon turns into a strong percussive romp. But it’s Byrne’s passionate vocals, straining at the top of his range and practically screaming at the climax, that steals the album.

There are a couple of true collaborations, including the bilingual song the duo wrote for a previous charity event, “Dreamworld: Marco de Canaveses”. The tune mixes the whimsical vocal nature of Byrne with Veloso’s mellow style, all wrapped in a slightly more rhythmically active Bossa beat. Byrne even tries his hand at some Portuguese lyrics on “Um Canto de Afoxé para o Bloco de IlÃª”.

For the most part, though, this show feels like two different concerts, one Veloso’s and the other Byrne’s. While there are probably more introductions to Veloso’s music here, his musicianship and his voice are essential, and for anyone who’s never heard Byrne sing with a sparse acoustic group, it’s a must-listen.