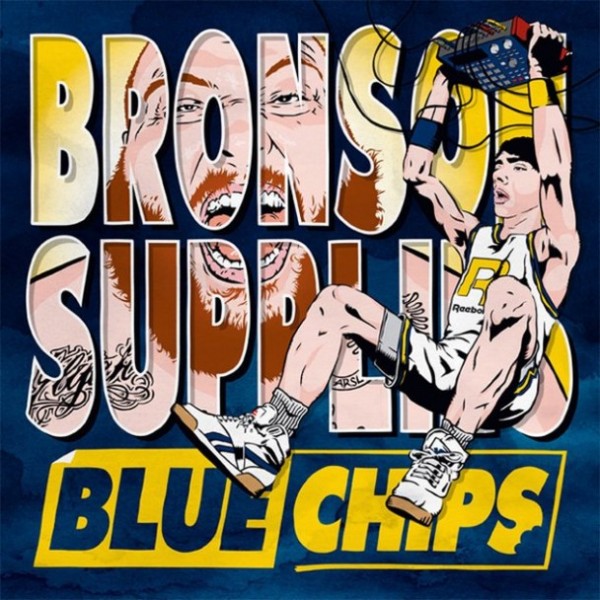 Sooner or later, there’s that watershed moment in everyone’s life where they realize that The Notorious B.I.G. does both of the voices on “Gimme The Loot”. You can pick out the exact pitch of helium-Biggie spitting “Goodness gracious the papers” or “From the beretta” out of thin air; it’s that sticky and recognizable. Treble rappers like Milk Dee from Audio Two, Slimkid3 from Pharcyde, and MCA/Ad-Rock from the Beastie Boys all have an implicit energy to their delivery even if it’s not always aggressive — much like the way our voices naturally raise in pitch when emotions come to a head. A new rapper’s tone and inflection are half the battle to making a first impression on the scene, and freshman MC Action Bronson is already the latest inductee to the canon of tenor rappers. But whatever you do, “don’t ever say [his] fucking music sounds like Ghost’s shit.”

Bronsolinio’s God-given gift of a signature tone forms only part of the putty that makes the infinitely quotable and hilarious Blue Chips mixtape stick to the walls. If indeed hip-hop is one of the only genres of music where comedy still carries any kind of currency, then Action Bronson too will be #richforever. Even though his culinary jokes are what separate him from any other (cash and confidence tropes are plated like, “I fuck good and make big C’s like a mango”) it’s never a schtick. He’s more than “That Food Rapper” . On Blue Chips, you get more slices from Bronson’s life than you would expect.

Confidence is always weighed against self-effacement with Bronson. On “Steve Wynn”, atop an leaned-back Aaron Neville sample brought to you by the mixtape’s able producer Party Supplies, the dichotomy is all in one line, “Foul living like Paterno and Sandusky/I’ve been husky/Motherfuckers couldn’t touch me”. At 5’7” and 270 pounds, Bronson makes the best of what’s (a)round, and his hyper-specific imagery illustrates him and his Flushing, Queens neighborhood with a pointillist’s precision. He surrounds himself with Michelin-rated food like roasted bone marrow and Vietnamese snapper, crack-addled hookers with hearts of pure gold, grotesque visions of sexuality recalling John Waters’ Pink Flamingos, and weed, weed, and more weed — staying “higher than an opera note.”

Part of the beauty of Blue Chips is that glut of one-liners isn’t forced into the subconscious by bracketing them with a chorus or muting the beat. They’re bare and spontaneous – woven into the fabric of the Party Supplies’ soulful throwback samples, like The Flamingos’ “I Only Have Eyes For You” (last famously used on The Fugee’s “Zealots”) on one of the highlights of the whole tape, “Thug Love Story 2012”. Young love with Bronson is a sordid affair, replaying the most awkward and garish of circumstances and laying them out like they’re business as usual. In his story, his crusty-footed amor falls down the path of prostitution, but that doesn’t stop Bronson from pining for that…well, you know. Bronson has more sympathy for hookers than Richard Gere in Pretty Woman on this tape, further evinced by the next track “Hookers at the Point” where he adopts a Chapellesque pimp character to talk about the call-girl game. If you didn’t hear the former track, you’d think “Hookers at the Point” was a callous jibe at ladies of the night instead of a cautionary tale.

Collectively, the tracks on Blue Chips are part and parcel a New York mixtape — full of retro sounds and imagery that recalls the nefarious streets of the city pre-Giuliani, pre-Disney, pre-Bad Boy Records. The seams show and sometimes bust open, like when Bronson gets tongue-tied and restarts his verses over and over on “9-24-11”. It’s the most fascinating track here; you still get to relate to Bronson and his foibles, but rare is the chance to see the curtain pulled back on a studio that’s not just a crew hanging out in the background partying.

The rest of the mixtape as a whole feels inexact, and most of the time that’s the best part. There are some bumps along the way, like the sparing use of guests whose inclusion seem either perfunctory, or they’re just too faded to drop a good freestyle (I’m looking at you, Kool A.D.). Bronson could have done all 17 tracks, all 44 minutes by himself and it would still be just as alive by the closing track, “Tapas”. He says that he doubts we could relate to his culinary preferences, but after this memorable and all-too-short time with Bronson — and you’re going to have to trust me on this — you might find yourself with a new penchant for some bucatini tossed with razor clams.