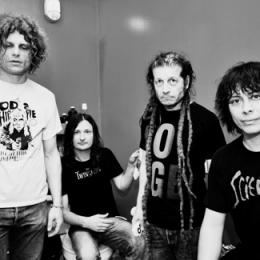 On May 8th, Los Angeles’ hardcore super group OFF! will release their self-titled debut full-length on Vice. Led by Black Flag co-founder Keith Morris and joined by Dimitri Coats (of Burning Brides), Mario Rubalcaba (of Hot Snakes), and Steven McDonald (of Hot Snakes), the supergroup surfaced at 2010’s South by Southwest Festival, signed with Vice, and released the First Four EPs. It should be noted that while their forthcoming full-length does sport 16 tracks, as Pitchfork points out, “‘full-length’ means 16 songs in 16 minutes.” How punk rock, huh?

To support the release, the band has announced a number of dates, including stops at South by Southwest and Barcelona’s Primavera Sound Festival. Check out the full tracklist and touring itinerary below, including a live performance of “Upside Down” shortly after.