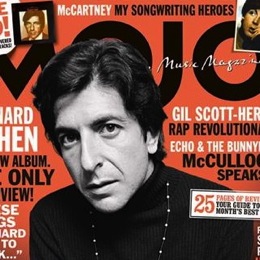 So in addition to Vimeo’s still ongoing Old Ideas With New Friends series, which has already seen Bradford Cox, Cold War Kids, Cults, and The Afghan Whigs Greg Dulli cover tracks from the great Leonard Cohen, there’s also a covers album of Cohen’s 1967 debut that comes included in the new issue of MOJO magazine. Contributing artists included Bill Callahan, Cass McCombs, The Low Anthem, Field Music, and ex-Fleet Fox’er Father John Misty, as well as Marc Ribot and My Brighest Diamond, who teamed up for a bonus track version of “Bird on the Wire” from Cohen’s 1969 album Songs from a Room. You can stream snippets of the entire thing below, or throw down £6.50 for a physical copy.

Cohen’s first album in eight years, Old Ideas, is out now. It was worth the wait.