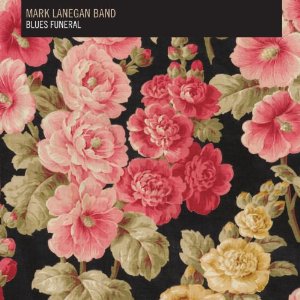 By his own admission, Mark Lanegan has never been a heavy lifter. Perhaps that’s why the reluctant frontman has spent the better part of the last decade sharing the workload with partners as broad-shouldered (at least figuratively so) as Josh Homme, Greg Dulli, Isobel Campbell, and Englishmen Rich Machin and Ian Glover (Soulsavers). But while the soft-spoken anti-rock star with prominent black stars ironically tattooed on each of his mic-strangling fingers has seemed more than content to be the understated Gutter Twin and receive second billing behind Campbell on marquees, it’s Lanegan’s bluesy baritone that so often seizes the unwanted spotlight. It’s that rugged croon—one of the least likely and finer-aging remnants of the grunge era—that makes his periodic solo efforts a necessary fix for loyal listeners on both sides of the pond.

Blues Funeral, Lanegan’s seventh solo album and second under the attention-diverting Mark Lanegan Band moniker, rings like the death knell for the singer’s early acoustic-based work, with returning producer/musician Alain Johannes (Eleven, Queens of the Stone Age) and legendary drummer Jack Irons helping Lanegan to further flesh out his favored brand of dead-slow rock. And it’s in these tweaks, refinements, and exploratory indulgences that Blues Funeral becomes a palatable record all its own rather than a twice-chewed, stale wad of 2004’s Bubblegum. “St. Louis Elegy”, for example, marries Lanegan’s sluggish vocal to a simple drumbeat and subtle background atmosphere (nothing revelatory for him there), but the instrumentation unexpectedly swells between verses with Lanegan’s layered, wordless wailing replacing a traditional chorus. These vibrant bursts fuel the track and clear the air for definitive Lanegan musings like “Down here the winter will cut you quick/If tears were liquor, I’d have drunk myself sick.”

Lanegan began composing several of these songs on keyboards and drum machines, as opposed to the usual guitar, and this change flavors much of Blues Funeral. The almost danceable “Ode to Sad Disco” and the crystalline, reflective “Harborview Hospital” add an electronic, beat-oriented sound to Lanegan’s arsenal that he allows his voice to roll over like a wave (see also “Gray Goes Black”), a significant departure from previous arrangements that typically isolated his voice above its accompaniment. But Blues Funeral, by any measure, is still a guitar-driven record. In addition to rumbling, swaying lead single “The Gravedigger’s Song”, “Riot in My House” infectiously crunches and rattles windows, and “Quiver Syndrome” is the ballsy, straightforward barnburner that Lanegan has never quite been able to lay down until now. His slight vocal turn on the line “The moon don’t smile on Saturday’s child,” which propels “Quiver Syndrome”’s chorus, alone makes this a must-hear track.

Lyrically, Lanegan continues to draw from his trusted lexicon of salvation, drink, and vice, the abundance of the latter two leaving the former seemingly always just out of reach. But his over-reliance on certain tropes shouldn’t discredit some fine lyrical work here. “In the citadel lightning/Splits a cloud of butterflies and fiends/And with a vacant stare, I leave a flower there,” sings Lanegan on “Harborview Hospital”, which pits its protagonist “down here in the dirt” looking up towards the “singing, away up on the hill… a mystical union, beautiful and still.” It’s a segregation that leaves Lanegan predictably on the outside but always with a longing view in. Swinging ropes, bottles of whiskey, and long, dark trains may linger longer, but Lanegan is equally adept at this type of lovely, often mystical, surrealist imagery.

Blues Funeral at times suffers from what seems like unchecked ambition or maybe just an inability to know when enough is enough. The aforementioned “Ode to Sad Disco” and the bluesy “Bleeding Muddy Water” both hit their notes perfectly early on only to let themselves bloat to over six minutes, which will leave listeners checking to see if their iPods are accidentally on repeat. Lengthy, synth-driven closer “Tiny Grain of Truth” inventively cycles along, but Lanegan remains a silent bystander for much of it, a listening experience akin to waiting by the phone, hoping to hear someone’s voice again.

It’s wonderful to see Lanegan and his usual cohorts pushing forward (even when it doesn’t quite work), because, quite frankly, his voice is so damn good that he could get away with simply rehashing and recycling old ideas for as long as he likes. Blues Funeral is a creative and fitting nudge out of the comfortable shadows and back into the harsh spotlight—where Lanegan belongs, at least some of the time.