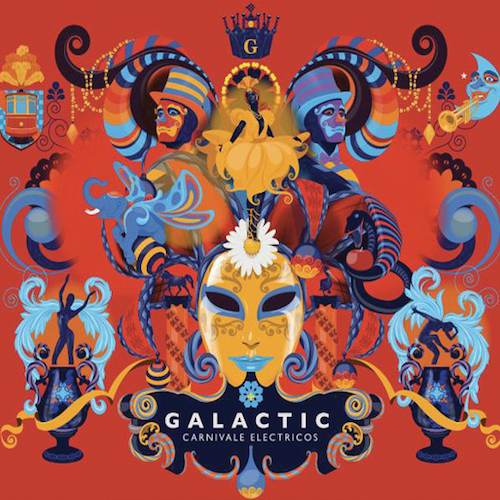 Hey, regressive classic-rock devotees! Why obsess over the ’60s or ’70s when you can go all the way back to the roots of American pop? After all, jazz and blues, originally forged in the great city of New Orleans, are two of the greatest American cultural contributions ever. The dilettantes in N.O. funk band Galactic know this. They pack that rootsy soul into modern, jamtronica pastiches of funk, zydeco, samba, marching band music, and bounce into Carnivale Electricos, the band’s Mardi Gras holiday record, which pulls from its city’s rich musical tradition reverently and dynamically with modern flair and a keen sense of history.

“Out in the Street” spotlights two members of the First Family of New Orleans funk, Cyril and Ivan Neville. It mellows Electricos slightly with a mid-tempo groove centered around stabs of either processed or synthesized horns. “Move Fast”, featuring Mystikal and Mannie Fresh, feels so modern it’s almost out of place. Anyone longing for Mystikal’s raspy growl and fast flow will welcome it, though.

Electricos‘ gorgeous final track, “Ash Wednesday Sunrise”, is its finest, working off Stevie Wonder-like electric piano work that’s downright sublime – but so is the dirty, funky brass groove that interrupts it. The song goes back and forth between the two, torn between the afterglow that is a post-Fat Tuesday sunrise and keeping the party going.

The sense of unbridled joy on Carnivale Electricos is infectious. It defies you not to dance. Like the city during Mardi Gras itself, the groove never stops and there’s no last call. Laissez les bons temps rouler, mes amis!