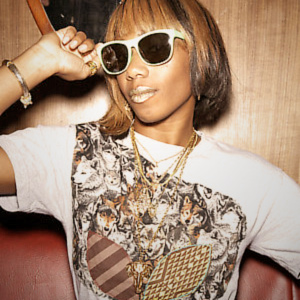 It’s been nine months since Santigold unleashed her Karen O-aided single “Go”. Since then, we’ve haven’t heard much more about the Philadelphia native’s upcoming sophomore album, though her name has shown up on tracklists for The Lonely Island, Spank Rock, and Amadou & Miram, as well as on Coachella’s 2012 bill.

Last week, however, Santigold revealed to V magazine that her new album will be called Master of My Make-Believe and will feature contributions from Major Lazer’s Switch, TV on the Radio’s Dave Sitek, Yeah Yeah Yeahs’ Nick Zinner, and songwriter/producer Greg Kurstin. Last night, she gave a further preview when she debuted several new songs during a concert at Brooklyn’s Music Hall of Williamsburg, as Stereogum and Tastes Like Caramel point out. Below, you can watch live footage of her performing tracks called “Disparate Youth”, “God From the Machine”, and “Big Mouth”.

There’s still no release date for Master of My Make-Believe, so stay tuned. Fans in Brooklyn can see her again tonight when she takes to Music Hall for another soldout show.

“God From the Machine”: