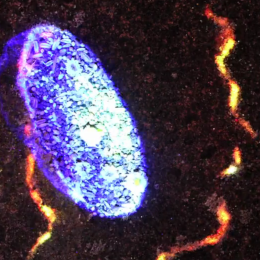 As of now, the so-called chillwave movement has been dominated by mostly American acts, like the Toro y Moi and Memory Tapes of the world. Throwing his hat into the somber mix, though, is Oxford-born Hugo Manuel, who records under the manly nom de plume Chad Valley. Manuel, who also plays in the synth-pop band Jonquil, first struck gold as a solo act in November 2010 with the release of a four-track EP that garnered comparisons of a UK version of Washed Out . Following up that first release, Manuel unveiled the EP Equatorial Ultravox, toured with the likes of Active Child, Friendly Fires, and SBTRKT, and is readying his upcoming debut full-length LP.

For insight into the aesthetics and sensibilities of Manuel and the Chad Valley Project, check out the music video for the track “Reach Lines”. Visually speaking, it hearkens back to Peter Gabriel’s “Sledgehammer” video, with the use of a stop frame-rotoscope to create a pre-edited sequence onto a concrete slab in Manuel’s garden. The end result is a smorgasbord of kaleidoscopic imagery with a feeling that is rich and organic yet decidedly artificial. A similar argument, then, can be made for the music. For better or worse, it falls in line with the lush waves of technologically-manipulated sounds that chillwave has come to champion. However, the vibe throughout the song is far more anthemic, as it crackles with energy and a kind of low-key etherealism. There’s also less of a narrow artistic point of view, as if Manuel is attempting to reach greater audiences with the song’s infusion of disco rumble and pop accessibility. Watch it below.

For a further sneak peek into the work of Manuel, you can stream a collection of original tracks and various remixes below. As always, stay tuned for more on Chad Valley as it’s announced.