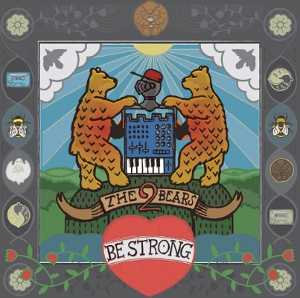 Grown men in comedic animal costumes? The 2 Bears can’t be accused of taking themselves too seriously and the duo’s debut album, Be Strong, exudes sheer fun as it embraces an honest love of classic House. While I can take or leave a lot of the stuff that passes for dance music these days, Be Strong ticks boxes that others leave empty. The tunes are always melodic, mostly feel-good and uplifting, while little touches in the arrangements keep things fresh and inventive within an albeit standard 4/4 retro groove.

Formed in 2009, The 2 Bears are the London duo made up of Hot Chip’s Joe Goddard with DJ and radio host Raf Rundell. Their collaboration is born out of a shared passion for House music, especially its communal vibe. Rundell adds affable lead vocals to several tracks in a South London amalgam of Ian Drury and Jona Lewie with a touch of Damon Albarn. It’s an easy-on-the-ear style that adds a lightness to the record. Having said that, “The Birds & the Bees” provides a bright opener, though it is largely instrumental. Little, looped layers of melody and bursts of brass add interest to an essentially two-chord turn.

The title track breezes down a familiar corridor while “Bear Hug”, which follows, sounds like the duo have invited English boxer Frank Bruno along to provide guest vocals. The alleged Bruno returns with some homespun homily on “Warm & Easy” (“Love is lovely, and war is ugly”), a song that drifts along nice and easy, keeps its tongue in cheek, and hits the uplift spot. The geezer-in-a-stetson approach to “Time in Mind” is possibly the only time the record misses a beat. The album closes with “Church”, a kind of comedown song with less of the chill. It embraces the communal spirit of House and resolves itself into the mantra “Let’s get up together” laced with Caribbean rhythms. And with that conundrum, the album neatly avoids any accusations of mere pastiche.