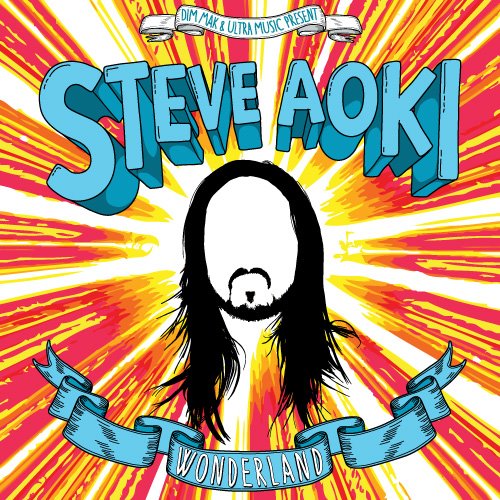 As the founder of electro-house label Dim Mak Records, Steve Aoki has influenced the careers of MSTRKRFT, Bloc Party, The Bloody Beetroots, and up-and-comers Dada Life. Since launching the label in ’96, Aoki has become a musical force in his own regard, building some of the most energetic and bang-y sets across clubs and music festivals worldwide. But with his time also spent running numerous clothing lines and a Korean BBQ joint, Aoki hadn’t found the time to write, produce, and distribute his own full-length–that is, until the recent release of guest-heavy Wonderland.

Featuring a healthy dose of industry heavyweights (Rivers Cuomo, Zuper Blahq/will.I.am, Lil Jon, Travis Barker, Kid Cudi, and LMFAO) and an equally appealing cast of newcomers (Nervo, Chiddy Bang, Robert Raimon Roy, and Lovefoxxx), Wonderland is a testimony to Aoki’s tastemaking ability. However, with so much diverse talent spread across just 12 tracks, the album listens more like a well-crafted mixtape or collection of singles than a dedicated, focused full-length album.

Wonderland is an adventure into (at least) three sub-genres of EDM: electro-pop, progressive house, and bass-heavy electro-hop. With swirling synths, a lush, electronic buildup, and a sing-along chorus delivered by Weezer’s Rivers Cuomo, lead track “Earthquakey People” can find a home on both Top 40 radio and nestled within a progressive house DJ set with a few stylistic edits. “Living My Love” (feat. LMFAO and Nervo) and “Control Freak” (feat Blaqstarr and Kay) each feature male/female vocal patterns that seem perfectly suited for mid-summer romances. Flowing soundscapes and sultry female vocals prevail on tracks like “Ladi Dadi” (feat. Wynter Gordon) and “Come With Me” (feat. Polina), seemingly aimed at fans who favor the production style of Kaskade and David Guetta over the bass-heavy aesthetic of many American DJs.

The tail end of the release is dominated by testosterone-fueled bass drops. “Cudi the Kid” (feat. Kid Cudi and Travis Barker) begins with sparkling key stokes, whirling noise, and augmented, half-spoken vocals, then transforms into a headbanging, fist-pumping, rap-rock anthem. The following track, “Ohh” (feat. Robert Raimon Roy), contains a filthy dubstep section that is sure to receive ample remixes. Either track could end up being 2012’s “Promises”, a track originally done by Nero that has made its way into thousands of brostep DJ sets across the globe.

Wonderland may have worked better as a series of EPs, but as is the album fails to be more than the sum of its parts, possibly even hindered by poor arrangement of tracks and the odd inclusion of “The Kids Will Have Their Say” (feat. Sick Boy with former members of The Exploited and Die Kreuzen). On the other hand, it’ll be a blast to witness the majority of the tracks in a live setting surrounded by thousands of dancing, screaming Aoki fans.