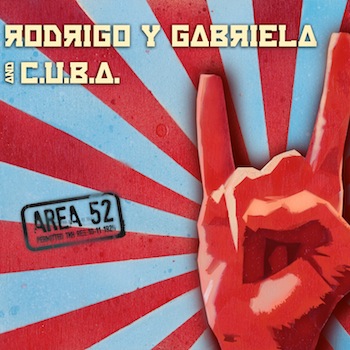 When Rodrigo Sanchez and Gabriela Quintero, a.k.a. Rodrigo y Gabriela, first burst into America’s consciousness back in 2006, they were received with a romanticized infatuation. It wasn’t the virtuosic fretboard acrobatics, which were remarkable and mesmerizing, nor was it the impressive and novel songwriting, a Frankensteinian mélange of flamenco guitar, Mexican and Irish folk music, rock, jazz, and thrash metal.

There was just something so idealistic about their story: two Mexican metalheads go to Ireland to busk on the streets and end up as international superstars. There was also just something so unbelievable about so much noise coming from two acoustic guitars. Rod y Gab made listening to “Stairway to Heaven” cool again. Their covers of Metallica’s “One” and “Orion” went viral in the early days of YouTube sharing.

Now, the Mexican duo have released Area 52, their fourth studio album, following the breakout success of their self-titled record and its follow-up, 11:11. This one, though, is quite different, and it seems to demand an answer to the uncertainty of what we value most about this group. Part of that answer might lie in the fact that Rodrigo y Gabriela have teamed up with C.U.B.A., a 13-piece Cuban orchestra, as well as a number of guest musicians, to give their new album a distinctly more localized sound than their previously global patois.

The mode of assessing Area 52 is difficult. As an Afro-Cuban record, it’s solid. There are thoughtful, pithy solos sprinkled into songs, with variations of instrumentation to keep it fresh and exciting. Bassist Carles Benavent’s lively lines are the perfect counterpoint to the dual acoustic guitar attack, and the minimally invasive percussion never covers up Gabriela’s ramshackle guitar percussion. There are moments of lush orchestration and smooth lines, as well, as during the slower sections of “Diablo Rojo”. Producer Peter Asher re-recorded all of Rod’s and Gab’s guitar parts, which results in a much cleaner, more austere acoustic guitar sound than the reverb layered tracks on Rodrigo y Gabriela. But how does this new album stand as a particularly Rodrigo y Gabriela record?

When they’re at their most transparent on Area 52, the duo are at their best, and that’s on “11:11”. There’s a strong, acknowledged Pink Floyd influence on this song–you can hear it in the tune’s odd time signature and epic classic rock chord progression– but what stands out is the core of the two guitarists. A light bass and piano accompaniment highlights Sanchez’s minor blues-flavored licks and Quintero’s ever-fascinating strumming percussion. When the horns emerge for a quick accentuation on the chorus lick, it’s the perfect usage, complementing the guitarists rather than taking over.

The middle of the track is dominated by piano and bass in what feels like a jazzy departure, until a heavily distorted electric guitar comes in, doing its best David Gilmour impression, Sanchez vamping arpeggio figures underneath. The whole thing feels like a natural outgrowth from the classic Rod y Gab sound, rather than an arrangement of their music for Cuban jazz combo.

C.U.B.A. is mostly absent on “Logos”, the album’s ballad, where a small combination of bass, piano, and light percussion showcase the standout melody. On other songs, the duo remind their audience that they cannot be contained within one genre or national style, inserting a lengthy sitar solo by Anoushka Shankar into the middle of “Ixtapa”. The song speaks in a weird and uncanny musical Esperanto, the sitar trading licks with the Cuban horn section on a Mexican folk song. Despite the differences, it all works.

“Arrangement” is the perfect word for what Rodrigo y Gabriela have done on this album, and the tracks tread a fine line between creative reworkings of their compositions and simple “cover versions” of their own music. Here on “Diablo Rojo”, which originally appeared on their self-titled, the various parts have been interwoven with a big Latin percussion breakdown, a flute doubling the leads, and punctuating horn accents. Arranger Alex Wilson knew to leave the best part of the composition to his two stars, however: Sanchez is the highlight on his big perpetuum mobile build to the final verse, accompanied by the frantic percussive strumming of Quintero.

In retrospect, the self-titled album sounds like it was recorded on a shoestring budget, in a room with one microphone, too much echo and too much reverb. When they begin “Tamacun” on Rodrigo y Gabriela, it bowls you over. It almost sounds like metal. On Area 52, the same song sounds like Miami Sound Machine, and in a good way. C.U.B.A. brings out the jazzy side of Rodrigo y Gabriela, an attribute that was previously subsumed into their more democratic brand of stylistic internacionalismo. Still, fans who long for that raw, unadulterated, romanticized sound of the earlier albums won’t find solace in Area 52.