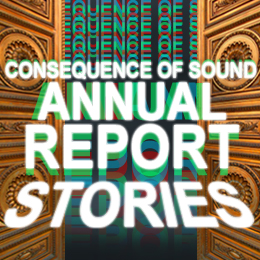 Two decades from now, how do you think 2011 will be remembered? As the year we lost Amy Winehouse? How about the year three of music’s most iconic outfits — The White Stripes, R.E.M., and LCD Soundsystem — all decided to call it quits? Maybe Lana Del Rey will prove a sustainable force and then we can all tell our children about the great collagen debate of 2011. Or try to explain to them how two rock and roll hall of famers came together to create the worst piece of music imaginable.

Yeah, 2011 was a fucking weird year. Like, a total mindfuck. We lost some great ones, both literally and figuratively, and we wrote or read about them in between stories about Wayne Coyne’s gummy fetus and Nick Oliveri’s standoff with a S.W.A.T. team. Along the way, we were presented with a legal way to listen to a jazilion songs for free, watched that dude from Nine Inch Nails win an Oscar, and witnessed the return of not just Kate Bush and Tom Waits, but Jeff Mangum as well. Yet, at the end of the day, Lana Del Rey’s collagen lips and Odd Future’s misogynistic tendencies won the award for stories with the longest shelf life on my Twitter feed.

Then again, four weeks from now it’ll be 2012’s turn and who knows what that year has in store. Maybe some scientist will be able to revive Jim Morrison’s frozen head so that we can have a true collaboration between The Doors and Skrillex. Whatever the case may be, Consequence of Sound will be here, 24/7/365, ready to bring you all the major headlines. Until then, though, we remember the last 12 months, categorized by themes, in the pages that follow. And, as always, thanks for reading.