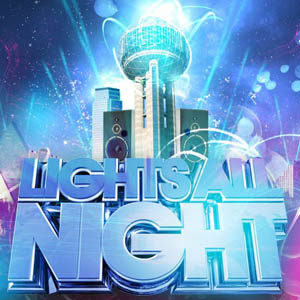 You know the drill. It’s eight p.m. on New Years Eve and you and a few close friends are sitting around your apartment, dressed to the nines, with nowhere to go. Maybe it’s because you’ve been so focused on Christmas that you forgot to make plans for the epic evening. Maybe every New Years Eve just ends up being a major let-down and you can’t be bothered with it. Or maybe it’s because you didn’t know about Lights All Night, a two-night electronic dance festival set to take place December 30th and 31st at the Dallas Convention Center in Dallas, Texas.

If it’s the latter, well you have no excuse now. Lights All Night has been described by Pollstar as one of the biggest end-of-year blowouts in the known universe,” and with this year’s line-up including TiÃ«sto, Neon Indian, MSTRKRFT, Ghostland Observatory, Girl Talk, and Wolfgang Gartner (among others), it’s easy to see why. Even better, the festival is also working with Red Cross during their event to raise money for the charity, so your conscience can feel good about it too.

So, thinking about hitting up Dallas now? Or, maybe you live nearby? Simple question: Do you want to go? We’re offering two passes to the year-end bash. To win, simply Like us on Facebook and follow us on Twitter. Then, share with us your craziest New Year’s Eve story in the comments section below. Extra points for any account that’s either a.) inordinately embarrassing or b.) rivals a Todd Phillips movie. None of that cute stuff, either. We’re not fans of Hugh Grant films here.

While you’re sorting through your memory banks, check out our interview below with the festival’s co-founder Scott Osburn of Highland Entertainment. He discussed how the festival found its feet in our volatile economy and what makes Lights All Night different from every festival out there.

So, to start things off, in one sentence, describe Lights All Night…

Lights All Night is a two-day electronic music New Years Eve event that everyone wants to go to, and once theyre there, they dont want to leave – and once they leave they will never forget it for the rest of their lives.

That’s quite the sales pitch! Aside from that, what is your biggest selling point for Lights All Night? How will you convince new festival goers to give your festival a chance?

Our talent lineup is unmatched by any other NYE event in the world at this point. Also, we are promising a first class event from every aspect to production, to theatrics and operations…in order for us to create a conducive environment for this type of experience we must make sure all of our bases are covered. Also, there will be some show-stopping production moments that Dallas has never seen before. We have the top theatric/design artist in the world that will be turning our space into a visual masterpiece.

What kind of line-up are you having this year? What is your basis and reasoning for selecting those artists?

We are hoping for the best and most well rounded electronic music roster in the US. We have six of the top 100 DJs in the world on one lineup and the rest are all very well respected in their genres and are on the rise.

We have a lot of great acts that have a strong local and international appeal. We feel that the reason we have chosen the acts is because they mix well and give electronic music lovers of all subgenres an opportunity to get a bit of everything. We truly have selected artists from across the entire spectrum of the electronic music genre. Our full lineup can be found at www.lightsallnight.com.

With other festivals having difficulty finding their feet in this economy, have you had similar challenges for Lights All Night?

Weve had a proven track record of success for the last three years. With Rolling Stone magazine deeming electronic music the largest genre in 2011, were pretty confident in the potential success of this event. Lights All Night is a Texas-based brand that is eventually going to be turned into a global brand. Were using this years event as a way to build a brand to show the country that we are a unique, innovative and safe event. Also, SPIN has come on as our official media partner and will be helping us spread the word this year along with several other key partners.

How do you define success? In your eyes, what will Lights All Night have to achieve to be considered successful and to ensure another season?

People leaving the event saying WOW! Ive never been to an event like that in my life. Last year people talked about it for weeks after it was over, they couldnt stop reliving the moments. Thats what this industry is about, creating moments for youth and people of all ages to gather and experience new and exciting things together.  We are a community and these are opportunities for all of us to come together and express ourselves.

Because this is a fairly new festival, is there anything else youd like people to know about it?

Highland Entertainment and MCP Presents (the producers of Camp Bisco), have created a partnership to produce Lights All Night 2011-2016 together. With that goal in mind, both organizations have agreed to bring its event production expertise together to create more than a show, more than event, a “happening”! Electronic music is exactly in the stages that rock and roll was in the 60s and 70s. This is the beginning of a long journey of over-the-top, innovative global electronic events. We have assembled the best team in the country from production, security, design, VIP services etc. Now all you need to do is show up with your dancing shoes and get ready to get down!