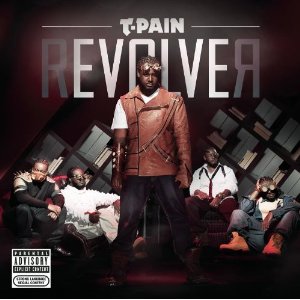 Hey, whatever happened to T-Pain, the Grammy-winning producer and hook singer who unleashed the Auto-Tune fad? He’s not omnipresent on the radio like he used to be but has received plenty of attention from one-off features and non-musical projects. Pain seems to have put more focus on creating an album, as opposed to manufacturing singles, for his most recent release, rEVOLVEr, which meets with mixed results.

The record kicks off with “Bang Bang Pow Pow”, a banger with a beat, hook, and Lil’ Wayne verse so hard you’d think Pain borrowed the track from frequent collaborator DJ Khaled. But its aggressive swag doesn’t suit T-Pain, whose persona works best at the intersection of party jams, love songs, and flirty seduction. For example, strip club anthem “Center of the Stage” features great spots from Bei Maejor and R. Kelly. Kelly, in particular, brings out the best in T-Pain (remember his verse on the remix of “I’m a Flirt”?), who has the raw talent and smooth charisma of Kells, minus the Chicago crooner’s eccentricities.

Instead, T-Pain’s charm lies in his sweet, heartfelt corniness. “Default Picture” has it in spades. It’s so posed, it doubles as a Twitter ad, but Pain totally owns it, as cheesy as its lyrics are. In the song’s words and sound (chimes in the intro, that blasted Auto-Tune again on the verses), it’s as if Pain refuses to be embarrassed or self-conscious on rEVOLVEr. Sonically, he goes full-on house cheese on “Turn All the Lights On” with Ne-Yo and “It’s Not You (It’s Me)” featuring Pitbull, full of pop-house sheen, a pop trend with which Pain is playing catch-up on this record.

He’s trying some new things, too, like pairing up Wiz Khalifa and Lily Allen on a slow jam (“5 O’Clock”, which works fairly well) and giving singer Chris Brown shine on “Look at Her Go” and “Best Love Song”. This is painful to admit, but these are two of rEVOLVEr’s better songs.

As toe-tapping or even eyebrow-raising as some of rEVOLVEr’s 17 songs are (overlong at 66 minutes of no skits, just music), there’s little to nothing here to put it over the top. But here’s hoping for more great T-Pain features, projects, and one-off singles.

Essential Tracks: “Center of the Stage” and “Look at Her Go”