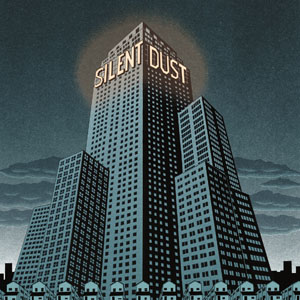 Artists in the drum and bass/ambient noise genre often find it hard to break the mold and the stereotypes of what they do. After all, a lot of people just think of drum and bass as innocuous background noise. Though if the genre is done right, it can elevate the music to a whole other plane of influence. It can be layered with depth and create emotion and mood in the listener, just as any good love song can. When UK DJs Zyon Base and Hobzee formed Silent Dust, the two set out to create what they called a “film noir” version of drum and bass.

That didn’t end up being the case with Silent Dust. Aside from a few distinctive tracks, such as the reggae-tinged, Hemingway-titled “The Sun Also Rises” and the haunting “Levitation Theme”, a majority of the 60-minute-plus LP ends up regurgitating itself. Space-age noises? Check. Occasional sampled vocals? Check. The urge to fall asleep? Che…

While there’s nothing off-putting about the LP, there’s nothing game changing, either. There’s also hardly anything here that would be construed as “film noir.” (We’re not looking for pulled clips from The Maltese Falcon or Howard Hawk’s Scarface, but stick to your cause.) Instead, it’s airy, safe, and pleasant. That’s about it. For all its trickery and fleeting hints of shoegaze, breakbeat, and electronic noises, it just screams of a missed opportunity. To quote Falcoln‘s Sam Spade, “I don’t mind a reasonable amount of trouble.” Judging from this listen, Silent Dust is hardly on the lam for anything.