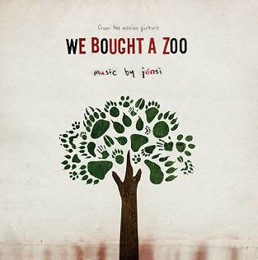 The press release also has additional details about the soundtrack’s contents. Written and recorded over four months this summer and fall at Village Studios in Los Angeles and at the singer’s home studio in his native Iceland, the soundtrack comprises more than half-an-hour of brand new music from Jónsi, including two full songs (one of which was co-written by Crowe) and nine “achingly beautiful” themes. Also included are “reimaginings” of songs from Jónsi’s 2010 solo album Go, the Sigur Rós track “Hoppipolla”, and orchestral arrangements by longtime collaborator Nico Muhly. Check out the tracklist below.

It also turns out that the soundtrack wasn’t Jónsi’s only contribution to the film. Apparently, Crowe is a giant fan boy of the singer and his band. In fact, the press release notes that Crowe actually made We Bought A Zoo “in honor” of Sigur Rós’ 2007 documentary Heima, and all the actors and crew members were given a copy of the doc in anticipation of this film’s shooting. According to Crowe, the actors also listened to Jónsi and Sigur Rós material in between takes. But wait, there’s more: the closing scene of We Bought A Zoo is “a cinematic homage to a specific moment in Heima when gleeful crowds stream in a Sigur Rós show in the far North of Iceland or, in this case, the newly opened zoo.”

So, basically you have two upcoming films from Sigur Rós to look forward to. That said, here’s We Bought A Zoo‘s official description (for those wondering): “[The film] is a funny, inspiring and true story about the magical power of family to persevere in the face of extraordinary challenges. This is Crowe’s first motion picture for all audiences, and stars Matt Damon, Scarlett Johansson and Thomas Haden Church. Damon portrays a single dad who, looking to give his family a much-needed fresh start, moves to a home situated in the middle of a zoo, which he and his two children will attempt to bring back to its once glorious state. ”