Legendary UK singer-songwriter returns with another intriguing piece of work 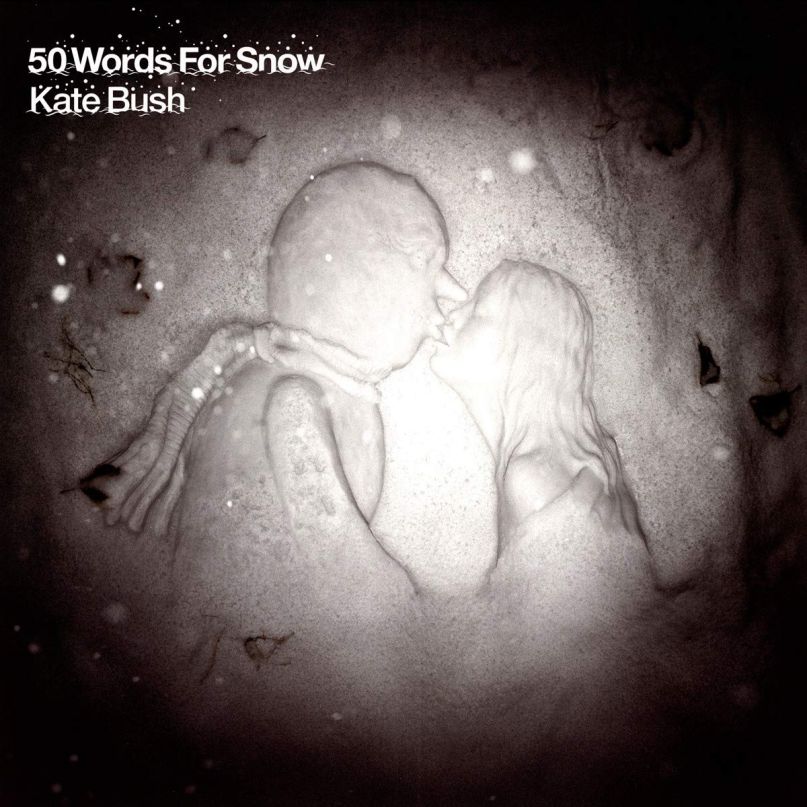 Revisiting older work on this year’s Director’s Cut gave Kate Bush a chance to review aspects of her canon so far. Her approach was as clear-sighted and inventive as we have come to expect, and through gaining permission to use James Joyce’s words (“The Sensual World” became “The Flower of the Mountain”), she finally got to “meet” him, entering into a dialogue of sorts.

A sense of dialogue is where 50 Words For Snow picks up, but this time it revisits another theme of Bush’s: nature. Using snow as a kind of landscape, it provides a sparse, beautiful, and ultimately pure backdrop for her creativity to soar.

“Snowflake” features lead vocals from her teenage son Albert McIntosh (“Bertie”), and his dove-like voice is reminiscent of his mother’s in his tone, enunciation, and softness; it is a lovely way to start the record. It creates a conversation with mother and son and also with the earth and us, since the song suggests we are of the earth, yet “ice and dust and light”; we are at once flesh and blood, yet ethereal, unknowable. The haunting piano that flutters around the piece creates an emotional fragility, the “midnight of Christmas” McIntosh sings of. “The world is so loud,” Bush sings, so she sets about creating a place of stillness for us to travel to and be transported.

“Lake Tahoe” begins with harmonies from tenor and counter tenor Stefan Roberts and Michael Wood that dissolve into a mournful piano composition, with Bush’s yearning, searching vocal, paying homage to a woman who is “just like a poor, porcelain doll.” She sings of a “spooky wood” and a beloved pet dog, creating a half-lit modern fairytale of someone in distress. “Misty” is an almost fourteen minute piece of brilliance about falling in love with a snowman – doomed from the beginning. The opening is reminiscent of Joni Mitchell’s “Last Time I Saw Richard”, while the later percussive aspects hint at those beautiful beats she has often thrived on, putting most electronic producers to shame. The composition twists from a driving rhythmic kind of a song to something akin to spoken word, mixing up a jazz sensibility with a touch of folk, creating an exciting musical space.

“Wild Man” sees Andy Fairweather Low becoming a Nepalese mountain-dweller and loving it, with Bush breathily singing about a Yeti. It features bells and strange guitars, and pays homage to an indigenous kind of music while also managing to filter Prince and David Bowie (particularly on the chorus). The song brings to mind “Hello Earth” from Hounds of Love with its sense of the natural world and the synthetic. The sound of blustery wind frames Bush’s exploration of different languages, which she navigates easily and earnestly, respecting their different shapes, sounds and histories, just as she did in Irish on her collaboration with Dónal Lunny on Sean O’Riada’s “Mná na hÃ‰ireann” in 1996.

“Snowed in at Wheeler Street” starts with Bush asking a question, before launching into the song that she shares with Elton John (one of her early heroes). Subtly squalling guitars illuminate a tragic story about true lovers kept apart by fate, history, and bad choices. This is a particular highlight of the record, with Bush’s barely constrained abandon drawing out one of John’s best vocal performances in recent memory. They inhabit not only a despairing narrative but a fragile world. It sits somewhere between an alternative “Somewhere” from West Side Story and a coda to Bush’s “Top of the City” from The Red Shoes. The message is similar– that amidst the despairing nature of tormented love, she doesn’t think “we should ever suffer.” This theme runs throughout all of Bush’s work, with the acknowledgment that although pain cannot be escaped, a striving for a more nourishing kind of existence can be attained.

The title track makes good use of Stephen Fry, and his perfect enunciation as he recounts many made-up words for snow (“creaky-creaky” is a particular favorite) reminding us of the various idiosyncratic collaborators Bush has employed over the years (the wonderful Rolf Harris springs to mind). Housed alongside something of a busy, almost housey beat, with delicate synths and luscious percussion, Bush relegates her vocal to the background, as she encourages Fry (“Come on now, just 22 to go”), but although she is in the shadows, her unmistakable voice acts as a sensual metronome to the pursuit.

That voice soars once more on “Among Angels”, noting Bush’s deeper register, and along with the glassy, frail piano, she sings of seeing angels shimmering “like mirrors in summer.” Her own dazzling existence is contained within that poetic line, but it also serves to remind that words mean just as much to her as the musical atmosphere she creates. While looking for 50 Words For Snow, she has found 50 other original ways to express herself effortlessly, creating another intriguing piece of work. In 1980, she sang that “December Will Be Magic Again”; in 2011, she has made it so.