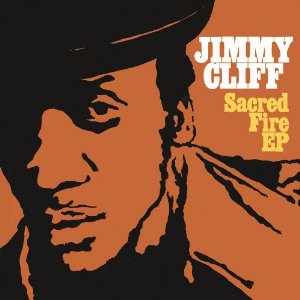 Bob Marley will forever remain the ubiquitous face of reggae, but Jimmy Cliff came before to inspire generations of musicians and introduce the world to the genre he and fellow Jamaicans called simply “makin’ music.” On his latest release, Sacred Fire, Cliff turns around to give a reverent nod to songs he originally influenced — looping the sequence of influence full circle. He also covers some early Bob Dylan and unveils a new song of his own. Produced by Rancid’s Tim Armstrong and recorded on vintage equipment, the five-song EP is a buildup to a full-length anticipated next year. It’s the Rock and Roll Hall of Famer’s first release since 2004’s Black Magic.

Back in 1979 when he wrote “Guns of Brixton”, Clash bassist Paul Simonon name-checked Cliff’s character Ivan from the classic Jamaican film The Harder They Come (which turns 40 next year). Cliff gives “Guns of Brixton” a crisp and traditional rendition, bouncing horn riffs above the driving beat. The song bookends the EP. Cliff dusts it off again for the final track, loosening the joints and giving it a dub treatment. Again, on his cover of Rancid’s “Ruby Soho”, Cliff rubs off the harder, murkier aspects of the original and allows the sunny reggae underneath to shine through. This isn’t really a surprise: The reggae beat, directly inspired by Cliff, lurked under there all along anyway.

Much more intriguing, in terms of covers, is Cliff’s take on Bob Dylan’s “A Hard Rain’s a-Gonna Fall”. He unpacks Dylan’s nasal delivery and cryptic Q&A-style lyrics to find a song that keeps Dylan’s brilliant hypnosis but transcends it in warmth and urgency. The song soars.

Cliff said in recent interviews that the “sacred fire” of the EP’s title is his own revived creativity, sparked by the collaboration with Armstrong, an avowed Cliff superfan. “Ship Is Sailing”, the only original on the album, doesn’t break molds lyrically, but it has a winsome lilt that is wholly infectious. It just plain feels good to hear the elder statesman of reggae stay this playful and open to inspiration.