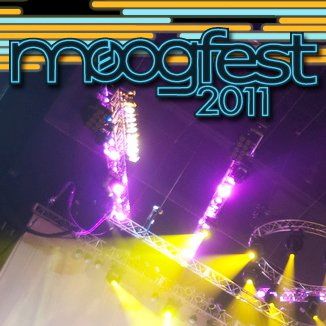 Steve Goodman is a busy man. When he isn’t running the well respected UK label Hyperdub, he’s making music as Kode9. As Hyperdub’s labelhead, he oversees Burial, the Bug, and fellow Moogfest performer Zomby, among many others. As a performer, he plays both DJ sets and live collaborations with The Spaceape. A well respected member of the electronic music world since the early ’90s, Goodson will be making a rare U.S. appearance at Moogfest this weekend. Recently, we spoke with him about coming to the states and why he chose to make the trek to the U.S. for Moogfest.

You’ve mostly been touring Europe since the release of your latest LP Black Sun. How has the reception been? Have the shows gone well?

Well we were doing live shows until around May, and the response was amazing, but then Spaceape became unwell and we had to stop the live show. So, I’ve been DJing since then and it’s been the only year I’ve actually enjoyed playing at festivals.

You don’t come to the U.S. all that often. What intrigued you about playing Moogfest?

Not sure really. I have a Moog synth, and love the sound. That was enough really. [laughs]

What are your expectations about the festival coming into the weekend?

I know there are some interesting artists playing, so I’m just happy to fly over for a [few] days, and give people a taste of my medicine.

You’ve recently done some sets of Burial’s music. How important is it to you to get his music out there, since he doesn’t ever appear in public?

Well a lot of people are so keen to hear his unfinished stuff, but its not something I do often, and only tend to do when I’m as far away from the UK as possible, where people tend have the tracks I’ve played up on YouTube within hours. I [rep] most of Burial’s releases, so occasionally I just have to test them out on a crowd in an unfinished state, and see what they sound like in that context. But, usually, I try to save his music for when it’s finished, as some of his fans get a bit feral when they sniff a forthcoming release.

What upcoming projects does Hyperdub have on its slate?

There are four amazing forthcoming albums which are all complete – King Midas Sound’s project which is due out in the next couple of weeks, and then early next year there will be albums from Scratcha, Cooly G, and Hype Williams.

What new music are you listening to these days?

Apart from all the forthcoming Hyperdub stuff, I’m really enjoying the new albums by Kuedo and Rustie.

What are your thoughts on the “U.S.” style of dubstep – Skrillex, Bassnectar, etc. – as compared to the more U.K. style?

It’s well known that I’ve not been a big fan of dubstep, in the UK or the USA for about three years. I still play a bit, alongside grime, house, footwork, etc. Objectively, I can see that the current crop of producers have found a set of frequencies that drives audiences totally mental. That fact is quite interesting to me, as an outside observer, or like a visitor in a zoo. But it’s not a style I listen to or play.

What’s next for Kode9?

I’ve just finished a remix of the band Battles on Warp. I’ve also just started work on my first solo album. Apart from that I’m looking forward to playing in China, South Africa, and Russia over the next few months.

What should fans at Moogfest expect from your show?

To get vibrated in a fashion to which they are not yet accustomed.

Be sure to catch Kode9 at Moogfest this weekend, performing Saturday night at the Orange Peel.