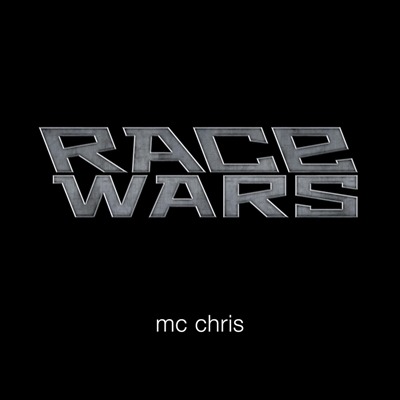 Some MCs rap about Steve Urkel, others about the silence of lasagna. Some even rap about having sex with dolphins. New York’s mc chris raps about Twin Peaks and Batman. The point is, ridiculousness is right at home in a lot of hip hop, and even if the nerdcore sub-genre isn’t your thing, you’ve gotta give mc chris credit for hanging tough at the top of his class.

Race Wars, mc chris’s seventh album, benefits from some of the best beats he’s had thus far in his career. This sounds higher-budget than anything we’ve heard from him, notably touches such as the drum line on “Jelly Inside” and the post-punk bass line on “Nerd Cave”. There are your standard hip hop braggadocio tracks like “MCCIB” and “Buckle Up” (“mc chris will not be denied/He may just be the best rapper alive”), as well as the geek-centric tracks that you have come to expect, including “Part One”, which tells Batman’s origin in rap form. “Tarantino” chronicles the director’s early career (“Mr. Pink was a hater who wouldn’t tip waiters/Mr. Brown went down, but he stayed with the flavor.”). While “Restart” adds some fire after a mildly forgettable midsection, offering a genuinely sweet love song about getting back together after a messy breakup.

Skits make up a healthy portion of the album’s running time, but they’re funny enough (save for a string of unfortunate rape jokes) to not drag down the album’s momentum. Most revolve around a fictional film entitled Race Wars (which seems to fall into a terrifying middle ground somewhere between Fast and the Furious and Star Wars: Episode 1: The Phantom Menace) and the fanboy fervor surrounding its release.

Race Wars is mc chris’s strongest release in years and is a must-grab for his followers. For those outside the cult of chris, there probably isn’t a better entry point than here.