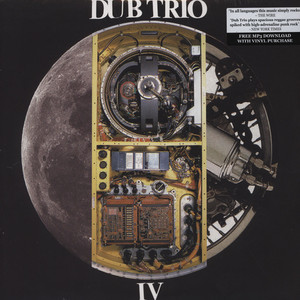 Dub, metal, and reggae. It’s an unlikely mix, but one the Brooklyn-based Dub Trio have made all their own over the years. Comprised of bassist Stu Brooks, guitarist DP Holmes, and drummer Joe Tomino, Dub Trio have provided the complex, yet solid, backbone of their phenomenal live support to touring musicians such as Mike Patton (with his Peeping Tom outfit) and Matisyahu, lent a helping hand in the studio to Yoko Ono and Mos Def, and all the while have found the time to record their own unique taste in rock.

Their latest (and aptly named fourth) studio album, IV, pushes rock and dub further into experimental territory. There’s more rock and metal on this album, which is where the band really excels, and the dub and delays that were more prolific before take a backseat.

IV slams onto the scene with “En Passant”, a hard-as-hell whopper that thrusts and pulses with grinding guitars, rolling bass, and Tomino’s prolific drum hits. By the time it burns into “Noise”, a rat-a-tat explosion of sound, and the gritty, distorted push-and-pull of “Swarm”, you’re already in full-on Dub Trio mode with your speakers blown sky high.

That said, some of the album is hit-and-miss with its various experimental ventures. “Ends Justify the Means” starts off with weird, spacey “wah wah” sounds that warp your ears into a vulnerable, uneasy state, yet it builds without really going anywhere. It’s more about sound and effect than melody in any form. Yet, next track “Words” is strangely compelling and emotive. Who needs lyrics when you can convey the same feeling through riffs, effects, and hard-hitting beats?

Though the inclusion of more sporadic, spacey “noise” songs like “1:1.618” makes IV less coherent than New Heavy or Another Sound Is Dying, when the trio really pounds hard, you feel it. “En Passant”, “Patient Zero”, and “Thousand Mile Stare” are prime examples of just what this band can do at the height of their game. IV was a risk worth taking for Dub Trio.