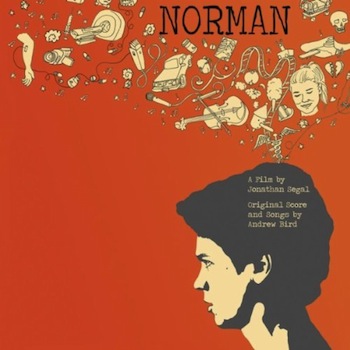 For Jonathan Segal’s new movie, Norman, the director tapped looping violinist extraordinaire and indie singer-songwriter Andrew Bird to create the soundtrack. One of the publicity blurbs describes Norman as a movie about “a self-aware and darkly funny teen,” which could mean the music goes with either an introspective hipster vibe or angst-ridden hard pop/metal. Given that Bird is the composer, we get the former, with a number of typically mellow and beautiful Bird folk/rock/pop tunes on here, the standouts being the acoustic and impassioned “Night Sky” and the electrically charged rocker “Darkmatter”. Additionally, there are a few choice outside contributions from the likes of The Blow and Wolf Parade.

The real surprise here is Bird’s original, non-diegetic compositions. He has created a background score that manages to tell quite a story, one of hope in the face of desolation, without even needing to see the movie. Bird follows a general formula of minimalist background sounds underneath deeply moody and passionate violin melodies. The former paint a cold, grey picture, while the latter breathe life and personality into the otherwise dour soundscapes.

Opening track “Scotch and Milk” captures this aesthetic perfectly. Oscillating chords of indiscriminate instrumental origin soon give way to a pulsating and nervous violin pizzicato, on top of which Bird layers lines of poppy violin melodies and driving tremolo strings. Other bits suggest darker scenes, like the eerie harmonics and dissonances of “Cancerboy Strikes Again/Monsterstream”. Luckily for Norman, his life isn’t just pain and suffering: He probably gets some action to the accompaniment of “The Kiss”, with finger-picked acoustic guitar and sweet, wordless vocalizations. Although they make for a staggeringly good movie score, these tracks probably won’t end up on your iPod; however, the five actual songs on this soundtrack are keepers.

Essential Tracks: “Night Sky”, “Scotch and Milk”, and “You Are a Runner and I Am My Father’s Son”