The Rapture – In the Grace of Your Love 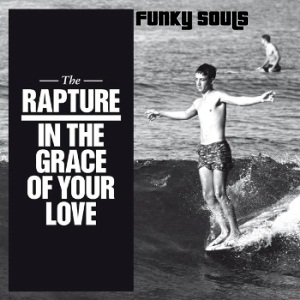 While spastic New Yorkers The Rapture have always been unabashed proponents of dance punk, the band has managed to stand out from their peers with a sound that relies on ramshackle idiosyncrasies and live-sounding instrumentation, as opposed to sterile beeps and clicks. As danceable as their 2003 masterpiece Echoes was, it was anchored by upstroke guitar, grimy saxophone, and, of course, rows and rows of cowbells, as much as it was by drums, bass, and keyboards. 2006’s Pieces of the People We Love had a sound that was a tad more futuristic but still boasted enough inherent weirdness and imperfections (particularly with white boy thrash cuts such as “Whoo! Alright, Yeah…Uh Huh”) to make for an addicting listen.

In the Grace of Your Love, the band’s fourth studio album and first in five years, finds The Rapture all but losing the edge they’ve been developing over the past 13 years. The songs deliver some memorable hooks and grooves but still feel oddly defanged, the beats mostly devoid of their once essential varied instrumentation, playfulness, and the thrilling sense that everything could fall apart at any moment. Opener “Sail Away” is drenched in saccharine keyboards, with Luke Jenner’s vocals sounding mailed in and maudlin. “Sail, sail away with you/gonna stay, gonna stay with you/on an ice-covered hill,” he repeats. The shrill-voiced singer has always been concerned with romance, but while Echoes yearner “Open Up Your Heart” possessed the creaky vulnerability of a boy singing for his parents’ friends at a dinner party, “Sail Away” finds him holding out the notes with no drive or emotion, off-puttingly disconnected from the rest of the band. A soundscape teeming with loungy organ and Gabriel Andruzzi’s broken saxophone comes out of nowhere at the end of the song, reminding listeners of The Rapture of old but failing to blend in with the rest of the melody.

“Miss You” fares slightly better, with handclaps and Andruzzi’s ebb and flow bass line whimsically driving the tune, even if the cloying keyboard sounds like a discarded Hall & Oates riff. The accordion loop of “Come Back to Me” takes a backseat to Jenner’s world music wailing and the synthesized-sounding bass, causing one to yearn for the rough, popping fuzz of the band’s earlier work. Latter cut “Can You Find a Way?” continues this international, club-minded aesthetic through gypsy-esque chanting. The album’s most sonically pestering track is “Roller Coaster”, centered around an endless wall of sound crescendo and tired metaphor. Lyrics have never been the band’s strong suit, but lines like “If life’s a roller coaster/then I want to get off” can’t help but sound phoned in.

One of the record’s bright spots arrives with “Children”, a cut that manages to chug through the band’s increasingly synth-focused leanings with enough bombast and catch to secure a potential hit. Once again, it sounds more robotic than The Rapture’s previous work, but it’s instantly memorable and captures the trio at their most celebratory. Closer “It Takes Time to Be a Man” blends a twinkle of plunking, wonderfully flawed piano with treble-laden guitar, as well as Jenner’s best blue-eyed soul impression. It all eventually gets interrupted by an impassioned woodwind wail from Andruzzi, making for a slow, dance-infused, crackling bending of genres, a pop experiment that glides the band through speakers at their diversified best. It ends In the Grace of Your Love on a high note, but the long-awaited progression isn’t enough to absolve the many tracks that find The Rapture blending in with their lesser peers.

Essential Tracks: “Children”, “It Takes Time to Be a Man”