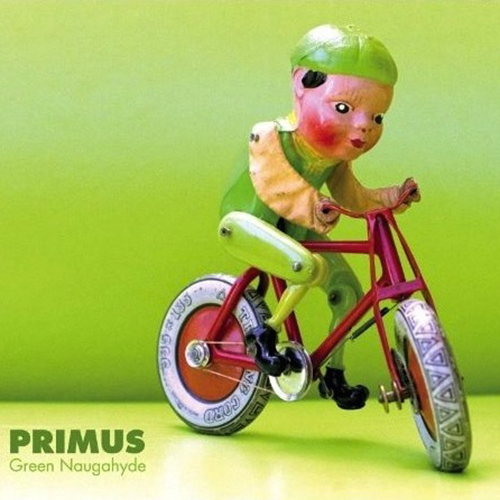 Lane, Ler, and Les — the current incarnation of Primus — left us salivating over the course of a lengthy US tour, pushing 2011’s Green Naugahyde with tremendous force as recompense for a 12-year absence. (In hindsight, Antipop wasn’t that goddamned bad, was it?) Tossing in a maximum of four fresh tunes during the summer properly set a new stage in evolution for the funk metal act once smirkingly proud to suck. Demand spread to the LP-hungering masses, and their turn is here. Time to funnel some sludge into your ear holes, fellow prawns.

Green Naugahyde is the end result of taking it back to the old school (“Eternal Consumption Engine”), the chronicled echoes of a fisherman’s mind fuck long forgotten (“Last Salmon Man”), plus a taste of honorary personal reflection stained with pork soda (“Jilly’s on Smack”). In truth, there are few better ways to describe the definitive Primus sound than “funky nightmare rock,” and the album cover echoing Billy from Saw with a little Moral Orel stirred in conveys that pretty well. Everything between self-deprecating humor (“HOINFODAMAN”) and a dose of “Lacquerhead” with the Frizzle Fry touch (“Moron TV”) unrelentingly shoves listeners into bouncy grooves direct from Wonka’s boat ride.

Elements of alternative rock, stoner metal, zombie hillbilly street preachers (“Tragedy’s a’Comin'”), huffin’ couch potatoes, and low-spoken non sequiturs all get reconstructed from bits of a dead era (“Eyes of the Squirrel”, “Hennepin Crawler” — formerly known live as “Pie in the Sky”). Green Naugahyde couldn’t be exclusively classified as a new page in the band’s history, because there is so much of the past scrambled in, deliberately or otherwise. It couldn’t be considered a dead-on classic either, because to say it trumps anything previously constructed by Primus is both hasty and insulting. Much like Primus’ musical territory, we have yet another gray area that defies the laws of tradition, which instead of reinventing the wheel gives it a fresh coat of paint.

Larry “Ler” LaLonde plays his complimentary role so well it’s scary, Claypool has never sounded better, and Jay Lane jumps back onto the train before it goes a-chuggin’ without him again. Questions? Comments? Salmon, anyone? By the way, Primus still sucks.