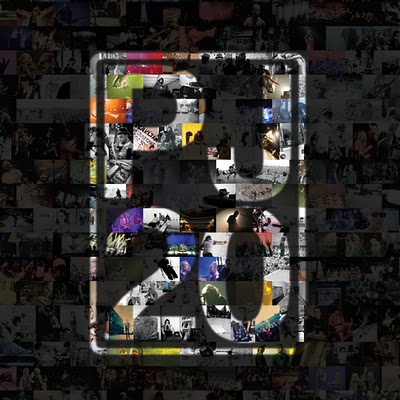 Twenty years ago, when the grunge scene was just picking up, Seattle’s Pearl Jam arrived with their now iconic album Ten. Even though they were often lambasted for trying to ride the coattails of the alternative rock scene, and often flagged for their lengthy guitar lines, the group managed to defy expectations by pushing the limits of their sound while still keeping their die-hard fans emotionally invested. Now, director Cameron Crowe (Almost Famous, Say Anything) delivers Pearl Jam Twenty, a new documentary that captures the band’s exhaustive history, celebrating the little details that all fans are sure to enjoy. The resulting soundtrack to the film is just as tailored for their audience, providing two discs full of live performances, rarities, and demos.

The first disc of the soundtrack is exclusively live tracks recorded in a period from 1990 to 2010, and in a range of places from Auckland, New Zealand (“Blood”) to Las Vegas (“Crown of Thorns”) to appearances on Saturday Night Live in NYC (“Just Breathe”) to tiny venues in Italy (“Let Me Sleep”). During the live tracks, the band avoids any pit stops, sometimes deviating from the plan but always keeping things intriguing. Eddie Vedder’s voice has a knack for always sounding raw and real, warbling along on some tracks and reaching a gut-wrenching bellow on others.

The second disc in the soundtrack, called Rarities and Inspiration, stays true to its title, featuring exactly that: a few demos and rarities. We have early 90’s takes of “Nothing As It Seems” and “Need to Know” and even a cut of Temple of the Dog’s “Say Hello 2 Heaven”, in addition to a few instrumental tracks such as “Of the Girl” and one soundcheck of “Faithful”.

One of the problems with the album though is the fact that it’s a soundtrack instead of a compilation CD. Without a screen to watch, to see how the tracks fit in with the movie, there is a sense of unity and coherence that’s lost. However, that is a common feeling with most soundtracks. Save for that dilemma, the album sparkles with live performances, particularly when it’s a softer, more intimate track. “Better Man” with its rousing sing-along at the start and the church-like soul searching of “Release” are two great examples of how Vedder and crew can connect with their audience in beautiful simplicity. The iconic “Alive” recorded at Seattle’s Moor Theatre captures the band at their fastest yet loosest while the stripped-down, acoustic take of “Given to Fly” showcases Mike McReady’s much-imitated style.

All great bands evolve throughout the years, but what Pearl Jam Twenty shows is how they managed to grow out of their grunge beginnings without ever losing sight of it. Pearl Jam has consistently proven that when the conditions and motivations are just right, talent and gusto (like a fine wine) can only get better over time.