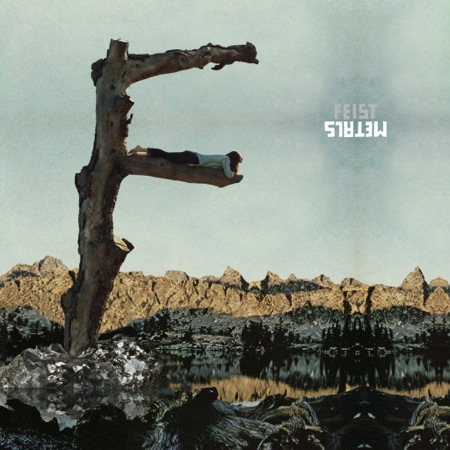 Eight tracks into Metals, you’ll find “Anti-Pioneer”. That title is a bit of an oxymoron considering the song was created by Leslie Feist, one of music’s most dynamic pioneers of recent years. She doesn’t do anything other-worldly or exceptional in terms of musical exploration, but she bridges a very wide gap between indie kids and the top 40 charts.

Back in 2007, Reminder hit “1234” caught on like wildfire. I vaguely remember a bastardized version of the song performed by Andy Bernard on an episode of The Office, and who could forget this gimmicky puppet-laden piece of Feist’s history or the iPod spot that played during every commercial break for the entire year of 2007? Suffice it to say, the single took the world by storm and in turn opened a window of opportunity for Feist. At that point, she could have sold out, said goodbye to her Broken Social Scene pals and her independent roots altogether, and taken off into the land of chart-toppers. But she didn’t. Instead, she let that single put her on the map and kept playing the music she’d been writing and playing for years, only this time to a much wider, more varied audience.

When this record hits shelves on Tuesday, indie kids will be skipping class to stand in line alongside business executives who meandered into the record store on their lunch breaks. And guess what? Both will be equally satisfied with what they purchase. The execs will be pleased with the pop sensibility of the album’s first single, “How Come You Never Go There”, and the indie kids will be pleased with the signature romanticism that immediately recalls her earlier work on tracks like “Cicadas and Gulls”.

What neither party will realize is that they’re both being shown a side of the world they never would have known to ask for otherwise, and that’s where Feist’s genius comes into play. She’s dancing dangerously in the generation gap between parents and their children ages 16-30. Neither party wants to listen to what the other is listening to, yet Feist is something they can both reluctantly agree on. In that regard, she is an absolute pioneer.

The album itself is worthy of praise from any angle you choose to view it. Feist soars into Metals with the sweeping folksy love song “The Bad in Each Other”, which immediately shifts to the contagiously dark “Graveyard”. As she boldly sings, “Bring ‘em all back to life” on the chorus of “Graveyard”, everyone, regardless of the age group, will remember why they fell in love with the 35-year-old Canuck in the first place. She sings with the confidence of a pop starlet (with the pipes to match) one second and pulls it back into her own unique, mysterious corner of the world the next. The transition is barely noticeable, such is the ease with which she slips back and forth.

As the album progresses, she sticks mainly to her native soft indie pop and maintains a fairly steady, easy-to-follow pace for the majority of the record. Metals has its minor dips every now and again (the TV on the Radio-esque chanting “A Commotion” and the slow, dragging aforementioned “Anti-Pioneer” come to mind), but it manages to stay positive through its 12-track entirety. The highs are so high that they almost cast aside the slower moments.

“Bittersweet Melody”, “Comfort Me”, and “The Undiscovered First” are all little ditties that are easy to fall headlong into and get lost in, but it’s in the more complex songs where this record truly goes from good to great. “Caught a Long Wind” is ethereal; it’s acoustically based but puts an enormous emphasis on Feist’s breathtaking vocals. Everything is so perfectly placed and balanced; it’s one that’s going to stick. The same goes for album closer “Get It Wrong Get It Right”. Not only does it wrap up a solid bunch of songs, but everything is crafted so delicately that it feels as if any extra sound added to the equation would snap the intricate framework Feist has created. It’s that sort of writing that makes her so universally likeable.

In essence, Feist skyrocketed to worldwide fame with “1234”, making her next move (this release) very important. The stage was set and ready for a much bigger audience, and she knocked it out of the park while still remaining true to her roots. That’s what we in the business like to call a “win win.”

Essential Tracks: “Caught a Long Wind”, “Get It Wrong Get It Right”, and “Graveyard”