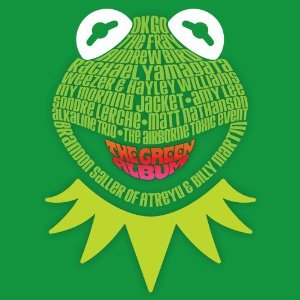 When OK Go lead singer and guitarist Damian Kulash got to meet Kermit the Frog a couple winters ago, you could have knocked him over with the proverbial boomerang fish. Kulash’s face—more like his entire body, being, and soul—was awash with a giddiness usually reserved for sci-fi fan boys who bump into George Lucas in the home electronics section of Kmart. For Kulash’s generation of 20 and thirtysomethings, Kermit, the banjo-pluckin’ amphibian who began as a discarded turquoise coat with halved ping-pong balls for eyes and went on to make “green” chic decades before Al Gore learned PowerPoint, is as iconic as it gets. As evidenced by Kulash’s visible awe, Kermit is the rock star who rock stars want to meet. So, it’s no surprise that OK Go, along with some of the biggest names in indie and alternative rock, eagerly contributed to Muppets: The Green Album, a collection of 12 lovingly covered Muppet classics.

Appropriately enough, Kulash and Co. “get things started”—though, not quite with a Crazy Harry-caliber bang—with their trippy, blip-and-bleep, beat-heavy version of “The Muppet Show Theme Song”. Rivers Cuomo and Paramore’s Hayley Williams pull up a lily pad and trade verses on “Rainbow Connection”, a rendition that finds its niche when Cuomo’s Weezer cohorts join in and turn the final verse into a warm, glowing march.

However, it might be the deeper cuts that really make this compilation a winner and also suggest that there are some serious, die-hard Muppet fans behind these mics and guitars. My Morning Jacket deliver a delicate and vocally daring “Brothers in Our World” medley—pulled from the final scenes of 1977’s Emmet Otter’s Jug-Band Christmas—that would make its composer, Paul Williams, proud. Sondre Lerche perhaps fesses up to catching Muppet Show reruns in Norway as a kid with his silly and infectious, mostly acoustic take on Scooter and Sgt. Floyd Pepper’s “Mr. Bassman”.

All that’s “green” isn’t necessarily gold here, but most of it shines. And these tracks, if you’re a 20, 30, or even fortysomething, will probably bring a smile to your now grown-up face. And you’ll probably have no better luck concealing it than Damian Kulash. But, hey, that’s what the frog does.