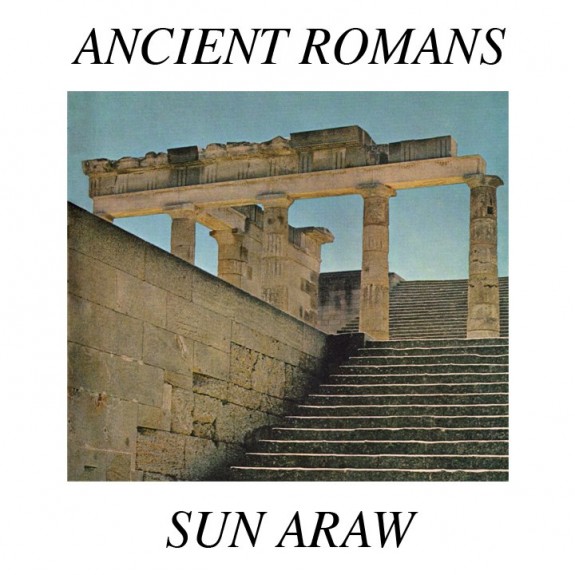 Cameron Stallones’ work as Sun Araw can be summed up fairly well in a single word: epic. Looking out over ambitiously imagined worlds, Stallones sweeps his cinematic scope across huge, bombed-out, urban landscapes; dripping, marshy alien planets; and other such vivid scenes. The music on each of his albums has been shockingly vivid, with evocative, psychedelic drones layered with tribal beats, fuzzy explosions, and twinkling electronic stars. And new record Ancient Romans provides more of all of that, the double LP and accompanying art book taking Stallones and his listeners on a journey through time and space.

From opening track “Lucretius” onward, Stallones’ vision of ancient Rome develops scene by scene, starting from a sort of veil of harp-like synths washing up and down like something out of a Lucky Dragons dream, as a thudding sub-bass marches its way into the frame. The synths on “Crown Shells” take up a similar tone, but the shimmying percussion turns it into something almost Animal Collective-y in its rhythmic, head-nod drone. A lingering, aimless string instrument wiggles across the top of the mix, as random burbles of bass and vague chants pop through the agora.

The growing claustrophobia of percussion cacophony on “Crete” gets squiggly, with multiple chirping guitars, and various synth noise squawks. The beach-y stylings of “Lute and Lyre” could be Mediterranean, taking the surf of the West Coast as a base and adding vaguely sitar-flavored synth stylings to spice things up. The epic, horn-like calls and marching drums of “Fit for Caesar” have the pomposity of a royal procession — but a smoked-out, lush, sincerely fun one.

Stallones’ rendition of Ancient Rome is one that carries the weight and power that many traditional views of that empire have but with some sensuality as well, some drugged-out touchy-feeliness. You can’t help but move along to some of the entrancing, pulsing drones found on Ancient Romans; altogether, another epic, grandiose, striking LP from one of the best and most underrated musicians of the moment.