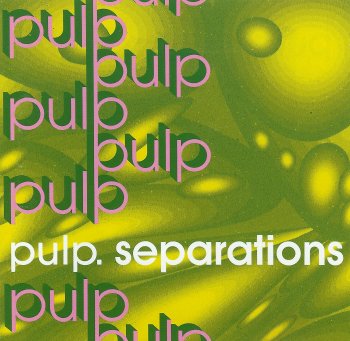 In 2006, Pulp’s three biggest albums were given the deluxe reissue treatment, with bonus discs full of B-sides and demos. Now that the long-awaited reunion tour is underway, Pulp’s first three efforts from Fire Records are being reissued as well. Oddly enough, the songs from this era have apparently been abandoned by the band, with “Countdown” being not only the lone song from 1992’s Separations to be unearthed during the reunion so far but also the only track from the entire Fire Records era to surface live.

In contrast to the acoustic balladry of Pulp’s debut, It, their follow-up, Freaks, was drenched in darkness and gothic overtones. While these albums stick out even among output as varied as that from the Pulp of the 90’s and beyond, elements of “classic Pulp” can be found among the elements that didn’t work. On Separations, their third and final album from Fire Records, the band’s sound incorporates a major influence from dance music.

Opener “Love Is Blind” takes classic Jarvis Cocker storytelling that’s equal parts sweet, sad, and bizarre and gives it a stomper of a beat that makes its nearly six minutes feel like three. At some point between Freaks and Separations, Cocker settled into what would become his signature vocal style, and he exudes confidence on songs like “Don’t You Want Me Anymore?” and the title track, which is a standout thanks to Russell Senior’s eerily, mystical violin work. Separations fully surrenders to the call of disco at its halfway point but sheds none of its dark undertones. Granted, the “single of the week” honor from NME for the almost-spoken, sensually cool “My Legendary Girlfriend” is what finally brought Pulp some mainstream attention and acclaim.

In addition to being their first hit, “My Legendary Girlfriend” is the point at which Pulp’s stylish blend of post-punk, disco, and glam elements and the wit of Cocker’s biting lyricism is fully realized, allowing them the greatness hinted at in their prior efforts. Russell Senior takes over lead vocals for the final time in Pulp history on Separations finale “This House Is Condemned”, an electronic creeper that sounds like Kraftwerk drenched in acid house. Although sounding somewhat dated compared to the timeless albums that followed it, Separations is a mostly memorable album undeserving of its tendency to be overlooked.