Video: The Flaming Lips and Weezer jam on “She Don’t Use Jelly” & “Undone” 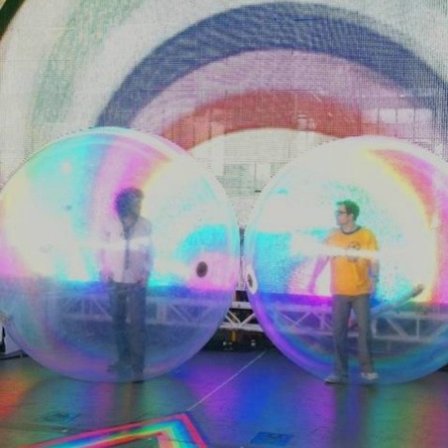 Although The Flaming Lips have gone collaboration crazy with a few younger acts this past year, news of their biggest collabo possibly ever came in May when it was announced that Wayne Coyne and company would join Rivers Cuomo and company (Weezer, folks) for a couple of East Coast shows along with Yeasayer.

Now, courtesy of Pitchfork, those not in attendance at Holmdel, New Jersey’s PNC Bank Arts Center last night can get a taste of what this wacky partnership sounds like with footage of the super-band performing the Lips’ “She Don’t Use Jelly”. With Cuomo on vocals, the two groups also covered Black Sabbath’s “Sweet Leaf” and Weezer’s “Undone – The Sweater Song”, although no video has surfaced as of yet for either. In addition, there’s also a clip of both frontmen making a simultaneous space bubble walk to make the entire experience all that more wonderfully bizarre. Update: Check out their joint performance of “Undone” below.

Check out the entire show setlist over at Psych Explorations of the Future Heart. Their second show together goes down tonight (July 29th) at Wantagh, NY’s Nikon at Jones Beach Theater. Perhaps Yeasayer can get in on the action this time and make this whole shebang the greatest thing to ever exist in every possible sense.

“She Don’t Use Jelly”