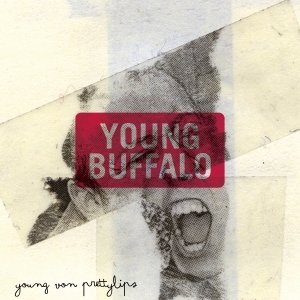 There’s a reason that Young Buffalo is opening for everyone from Wu Lyf and Tennis to The Vaccines and Arctic Monkeys. The Mississippi-based trio of Alex Von Hardberger, Jim Barrett, and Ben Yarbrough expertly mine so many facets of successful indie rock (the Americana harmonies of Fleet Foxes, the bombast of Arcade Fire, the clever playfulness of Vampire Weekend) and then mash them up masterfully, with a friendly dose of college rock clatter. The only downside to this sort of cross-pollination is a sort of blurry inconsistency, resulting in a certain pleasantness on their new EP, Young Von Prettylips, a feeling that lacks intense, personal reaction.

“Only We Can Keep You From Harm” opens the EP on monastic, wavering chants of the song’s title, which receives a dose of clap-and-boom percussion to keep things flowing. Just over a minute into the track, though, everything turns on its head, resulting in a big, shimmering indie pop anthem. Both halves are effective, technically powerful, but, besides a similarly tribal thump in the rhythm, have little to do with each other until a brief return to the chant near the song’s conclusion. The shambling rhythm and near-sitar drone on “Speak EZ” follow with more soaring vocal harmonies arched over the top. The song drops any pretensions towards psychedelia pretty early on, instead focusing in on a flowing, fluttering Fleet Foxes-style track.

After the cheerily titled “Full Metal Whacket”, the band dives into the strongest song on the disc, “Catapilah”. The driving, click-filled rhythm and churning chord progressions are eerily reminiscent of Sung Tongs-era Animal Collective, but the Casio tones and rich, smirking vocals hit more like Vampire Weekend. “You can’t help but feel strange” is a strange enough cry for such a masterfully crafted indie pop gem, a song that so perfectly captures the time that surrounds it. The shouts of “Yes we can!” do a better job of summing up the disc, an insistence and capability that should push these guys past in-demand openers.