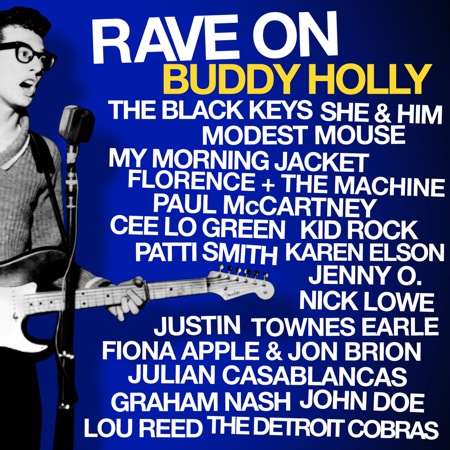 An album of Buddy Holly covers is pretty daunting. He arguably invented rock ‘n’ roll before the age of 22. His backing band, the Crickets, supposedly inspired the Beatles’ name. And Rivers Cuomo looks just like him. Fortunately, the artists covering Holly’s biggest hits on Rave On Buddy Holly are allowed to interpret the songs however they want. Certain artists bring more of their personalities to the table—Paul McCartney’s spit-flying screaming on “It’s So Easy” and Patti Smith’s Spanish sweet nothings on “Words of Love”, for example—while others, like too-cute-for-school She and Him, stick to sunny ’50s pop on “Oh Boy”. A few, like Nick Lowe and Justin Townes Earle, celebrate Holly’s Texan roots with twang-y reverb. The most successful covers (splitting hairs, really, since they’re all creative and well-executed) turn the tables on Holly, drawing out the anger and pain behind the song’s original angst or singing the part of Holly’s object of affection.

Given his reputation as somewhat of an alcoholic, Strokes frontman Julian Casablancas was an appropriate choice to sing “Rave On” for the title alone. High-pitched and grungy guitars bolster his tragic falsetto for layers of texture, and the minor chords in the chorus tug at the listener’s heartstrings. Similarly, Cee Lo Green of “F-ck You” fame was an apt pick to sing the backhanded compliments on “(You’re So Square) Baby I Don’t Care”. He brings out the song’s sweetness with a calypso beat, but his clear tenor elucidates how, frankly, insulting the lyrics can be: “I wonder why I love you, baby/I guess that’s just because you’re so square”. Karen Elson’s ensuing version of “Crying, Waiting, Hoping” conveys the original song’s insane optimism and desperation with galloping fiddles. Even though she ostensibly recorded this song before her celebrated divorce from Jack White, that fact adds irony that probably never crossed Holly’s aching heart.

His songs almost always address a girl he wants but can’t have; so whenever female vocalists sing Buddy Holly, their versions respond to him. Jenny O. challenges Holly’s futile quest for affection with her sugary “I’m Gonna Love You Too”. By changing the gender in the song—“After all, another girl took you up” instead of “guy”—she wonders if he truly, madly, deeply wants to be with her or if she’s just another song title. Florence and the Machine twists that same sentiment on “Not Fade Away”: Her sexy, borderline sinister voice coaxes, “I’m gonna tell you how it’s gonna be/You’re going to give your love to me.” Backed by tubas and mechanical drum taps, Florence’s version is meaty and compelling (I’m more inclined to listen to her telling me what to do than Buddy Holly). On the more innocent “Everyday”, Jon Brion and Fiona Apple sing the only duet on the album. Their complementary voices mitigate the longing behind the album’s boys versus girls theme. The xylophone and handclaps in the background give one of Holly’s most popular songs a new, almost nursery-rhyme quality.

And let’s not leave the male vocalists out. Kid Rock’s soulful vocals on “Well All Right”, backed by Motown-worthy horns and bass, reminds the listener why Buddy Holly’s music famously won over an all-black audience at the Apollo Theater in the 1950’s. My Morning Jacket’s Jim James trades his full-throated yowl for a sweet warble on “True Love Ways” and Graham Nash takes depression to new heights on “Raining In My Heart”. Both artists eschew contemporary instrumental arrangements for, respectively, romantic 1940’s violins and piano chords that belong in a Nora Ephron montage. All the musicians on Rave On Buddy Holly run such a gamut that it’s hard to dispute Buddy Holly’s continuously far-reaching influence in music. At the same time, if these songs weren’t on a covers album, it would be easy to mistake them for a Lou Reed original or an old Modest Mouse track. Whether that speaks more for Holly’s talent as a lasting songwriter or these artists’ ability to contemporize classic pop will remain unknown. Until the Lou Reed covers album, of course.