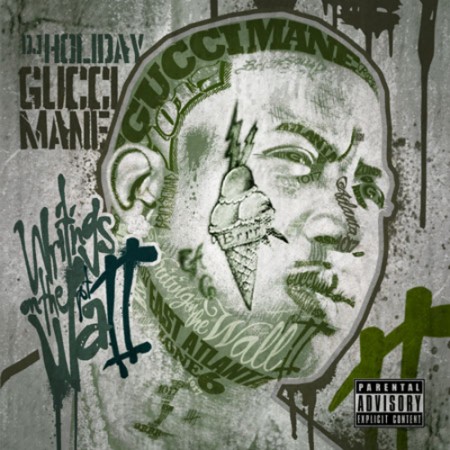 Gucci Mane’s latest mixtape, Writings on the Wall II, is chock-full of everything that has built him one of the most loyal followings in rap: fun, yet hackneyed rhymes; sticky, yet goofy hooks; and solid guest spots from his 1017 Brick Squad crew and others. Though it’s no less polarizing than any of his previous outings, it’s one of the most consistent batches of tracks Mane has released since he began to light up DatPiff’s charts roughly three years ago.

Contrary to the implications of the tape’s title, Mane doesn’t do much rhyming about his most recent prison stint here. Instead, he sticks to his usual topics: ladies, money, and the pros and cons of making questionable decisions. He does so atop the likes of Lex Luger’s torrential high hats and Shawty Redd’s rumbling brass loops. His most clever lines are still pretty ridiculous and hardly impressive. (“I call my secretary my sexatary/I sent that bitch a picture of my dicktionary,” he raps on “Two Dope Boys”.) But when dealing with a tape of this nature, that’s only a serious problem if you’re expecting KRS-One levels of knowledge-dropping.

While the best part about the tape is its track-for-track coherence–unlike most of Mane’s releases, there isn’t a single atrocious or incongruous moment here–the worst part is that there isn’t much difference between its peaks and valleys. Nevertheless, it’s a hell of a step up from January’s Gucci 2 Time tape and signals that Mane’s upcoming album, the Waka Flocka Flame-abetted Ferrari Boyz (due next month), if a bit more focused and refined than this, might be something special.