Video: Florence and the Machine stop by The Colbert Report 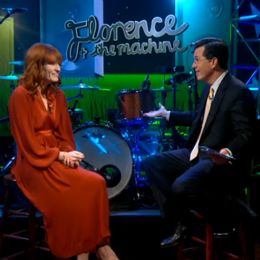 Those who tune in to Comedy Central at 11:30 to see their nightly dose of political satire are mostly being denied their fix this week. Self-proclaimed music lover (and apparently ex-musician) Stephen Colbert devoted much of the program (and will devote two more programs) to Jack White and his Third Man Records. And it’s hard to follow White up, but the icon’s appearance was proceeded by blossoming star Florence Welch, who did the usual awkward interview-into-performance thing.

In the first clip below, Colbert grills Welch on the drunken bathroom discovery that spawned her career, boasts about his comparatively decorated Grammy record, and ends the one-sided discussion by prompting an awkward 10-second silence. Florence and the Machine pierced the silence by performing the usual “Dog Days Are Over”, followed by the online exclusive “Cosmic Love”. Welch wears a black gown and performs over a mic stand adorned in roses, and her abilities are on full display; Colbert’s approval was evident. See below, via Colbert Nation.

“Dog Days Are Over”