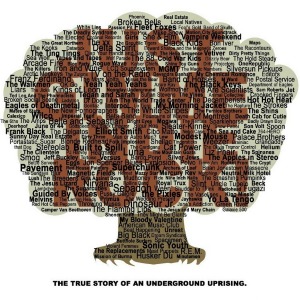 What is indie rock? Apparently producer and director Brad Katz wants to answer that question. Currently, the Los Angeles visionary plans on putting together a film that not only addresses that question but his generation of rock ‘n’ roll. Titled JUST GIMME INDIE ROCK!, after Sebadoh’s classic underground anthem, the feature film documentary covers “four transformative decades of American music and culture” to “[reveal] the single greatest rock and roll story never told.” Pretty ambitious, but Katz isn’t the only one telling the story.

Already, Katz has been hard at work compiling hours of countless footage – from late-night appearances to long forgotten music videos – in addition to personalized interviews with Henry Rollins, J Mascis, Lou Barlow, the Submarines, and Stephin Merritt (which you can peep below). “Whether it’s a beautiful eight camera shoot of Guided by Voices recent reunion, a classic Superchunk music video, or an intimate performance by Devendra Banhart procured from a new generation of pocket video toting fans, JUST GIMME INDIE ROCK! will let the music speak for itself,” Katz insists.

So, pretty much a great, exciting project, but there’s also a catch. In a move that’s all too fitting given the subject matter, Katz has turned to indie rock’s many followers in hopes to fund the film. Using Kickstarter, he plans to raise $75,000 and that’s only for “Phase 1 Financing”, which he says is “the bare minimum [they] require to keep on keepin’ on, ramp up production a bit, and hopefully get something resembling our vision on film.”

By now, most should be familiar with this sort of grassroots methodology. For the past few years, it’s reshaped independent cinema – especially for pet projects like this. Most recently, director Gorman Bechard’s used the internet to find fans for his Replacements documentary, Color Me Obsessed, which finally hit independent (and DIY) movie houses this past Spring. But by working with fans to spread the word, though, the project takes on this more personable aesthetic that is incredibly alluring. Katz recognizes this, as he writes, “Your generosity of money and spirit will ultimately determine the scope and scale of the parade your indie heroes will receive.”

If that sounds like a dream you’d like to see come true, then head on over to Kickstarter, where they’ve already raised almost $8,000, check out the incentives, and make JUST GIMME INDIE ROCK! happen. Hell, if you’ve got the cash to spare, you could be an Associate Producer overnight. To quote Kurt Cobain, “It’s pretty scary.”