Check Out: Zooey Deschanel and M. Ward – “So Long” 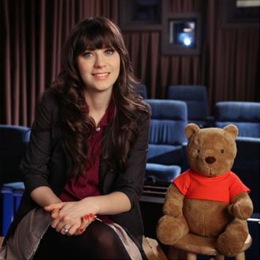 Admittedly, there’s probably no act as bright and bubbly as M. Ward and Zooey Deschanel, collectively known as She & Him. They’re so wuvvy duvvy that it it made perfect sense that the duo were tapped to provide three songs for the upcoming soundtrack to the Winnie the Pooh reboot. With the theme song already so adowable that we want to squeeze a box of kittens, another sample drops in the form of “So Long” (which was previewed during the initial announcement.) To almost no one’s surprise, this offering is quite possibly more cutesy than the first track; so much so, in fact, that we’d like to rip a rainbow from the sky, bake into little cakes, and hand them out to every pudgy faced child in the world.

Check out the track at Some Kind Of Awesome. The OST drops July 12th, with the movie hitting theaters July 15th.