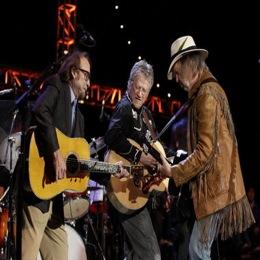 Of all the acts scheduled for Bonnaroo this coming weekend, Buffalo Springfield stands as one of the festivals biggest gets. Reunited after 43 years, the Manchester, TN event will be the only festival gig the band plays this summer. Founding-member Richie Furay spoke to journalists during a press conference call on Friday about Buffalo Springfields plans for Bonnaroo and beyond.

When asked about the future of Buffalo Springfield, Furay confirmed that the group will continue to tour through at least the fall. While logistics are still being hammered out, he said to expect dates to be announced for September through November of this year.

He also addressed the possibility of a live album emerging from the reunion. Im sure things are being recorded, he said. What we decide to do with that is anybodys guess. Theres also the chance of some new tunes, as Furay says hes learned never say never. Regardless, fans definitely have a new release to look forward to, as Furay promised a vinyl box set called Buffalo Springfield Complete containing all three of the seminal groups records.

As for Bonnaroo, Furay expressed excitement at the opportunity to introduce a younger generation perhaps more familiar with the names of his band-mates Stephen Stills and Neil Young to the roots of those artists sound, saying, Theyre going to be surprised. Were going to connect them with. . . where this all started. With that aim, Furay confirmed that their set will consist almost entirely of songs from Buffalo Springfields catalog, with the one exception being regular closer Rocking in the Free World. When questioned why the Neil Young track made the cut, he called it a rocker that lets Stephen and Neil let their guitars fly. Its a closing song, ya know? He also mentioned Hot Dusty Roads and Broken Arrow as songs that could make an appearance.

At the end of the conference, a question came regarding the musics ability to hold up over four decades after it was last performed by the group. Undaunted, Furay claimed that hes been enraptured at how good [the songs] sound today. I can sometimes just get caught up in the moment and listening and say oops, I gotta go sing now. It sounds like its going to be one hell of a weekend down on the farm.