Arctic Monkeys  Suck It and See 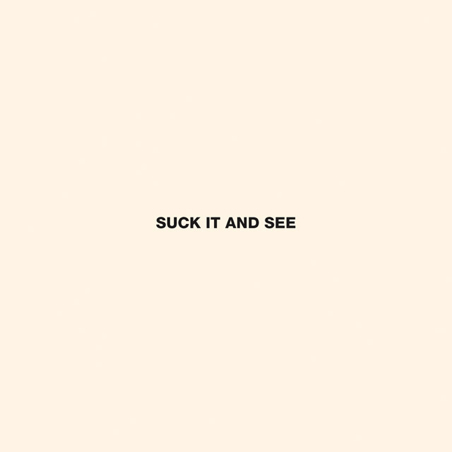 From about the moment they broke (arguably the release of their debut single), the Arctic Monkeys were declared by an overeager public and press to be, as many before them and since have been, the saviors of British guitar rock. Rather than overreact to the burden of said prophecy though, as their fellows nearly all have (see: the unspectacular implosion of the Libertines), Alex Turner & Co. have politely shrugged off the spotlight, doing instead what many initially wouldn’t have dreamed: five years and three very good albums counting since their lauded debut, they’re very much alive and well. Indeed, if their last offering, 2010’s Humbug, was any indication, the boys from Sheffield are well on their way to one of the most solid post-Britpop careers of the last decade.

Where that third recordlost many, though, was its sudden swerve for the psychedelic. While Favourite Worst Nightmare retained much of the witty, wordy charm that made Whatever People Say I Am, That’s What I’m Not the fastest selling debut in British history, Humbug is a Josh Homme-curated trip into considerably heavier, trippier ground. As it usually goes for a band with as big a following as the Arctic Monkeys (their first two records went quadruple and double platinum, respectively, in their native Britain), the initial public reaction to the shift, while certainly not too negative, was rather dismissive. It seemed that the more fans wanted the latest in an ever-growing line of cute British boys in prim haircuts to sing their sweet little ditties about riot vans and the dancefloor, the harder the Arctic Monkeys wanted to rawk.

Suck It and See finds the Monkeys further down that road, now without the production guidance of their esteemed mentor (barring Homme’s guest harmonies on standout “All My Own Stunts”), but certainly maintaining much of his influence, coupled with that of producer James Ford (who starred with Turner in his desert-rock fling, the Last Shadow Puppets). In incorporating just about every one of their past three albums’ strongest elements, while avoiding the all too oft-committed mistake of attempting to replicate their early mega-success, the Arctic Monkeys clear the tricky fourth album hurdle with practiced ease, delivering their best, most cohesive full-length since Whatever…

Both instrumentally and in verse, the Arctic Monkeys have long been miles ahead of their peers: as their friends and tourmates in Reverend and the Makers and the Rascals were content with jangly guitar lines and scruffy post-punk revivalism, the Sheffield-based outfit seemed to have their sights set on a much bigger prize. Even as they explored everyday ups-and-downs in the lives of suburban British twenty-somethings, the quartet spun songs so tall, so effortlessly well-constructed, many had trouble believing it was actually just four British kids behind it all. Three albums later, Suck it and See is a thorough success imbued with the very same spirit, reflecting the boys’ widely expanded palette while successfully working in everything they did so well in their yester-album: Humbug‘s molten riffs and glinting guitar lines crop up often (as on the blistering album opener “She’s Thunderstorms”), latched to Turner’s affecting croon and his bandmates’ Bad Seeds-y refrains, such as drummer Matt Helders’ call-and-response shouts on “Brick by Brick”. Lyrically, Alex Turner’s patented sharp, quintessentially English wit — which has won the frontman comparisons to his legendary Anglo-forbears Morrissey and Jarvis Cocker — finds itself entangled in the sort of Nick Cave-inspired gothic balladry they embraced, as it does so delightfully on Suck it and See‘s stellar title track, on which Turner sings in his consciously syrupy coo: “That’s not a skirt, girl, that’s a sawn-off shotgun, and I can only hope you’ve got it aimed at me.” Elsewhere, the band displays a wider dynamic range than ever.

Early in their career, the quartet were singled out by Depeche Mode’s Alan Wilder for producing, what he called, “a bombardment of the most unsubtle, one-dimensional noise.” While a quick listen to the track in question does sorta prove his point, Wilder would have trouble saying the same thing this time around, as the boys display a wider dynamic range than ever (see the transition from the relative calm of “The Hellcat Spangled Shalalala” to the furious one-two punch of “Don’t Sit Down ‘Cause I’ve Moved Your Chair” and “Library Pictures”), while maintaining a steady fervency throughout, across the record’s 12 tracks.

Even if Suck it and See didn’t shape up to be as fine an album as it proves to be, the quartet behind it deserve major credit for their ensuring that any conversation about them has to do, first and foremost, with their music. Indeed, it’d almost be too easy not to take the Arctic Monkeys seriously (any list of chinks in the band’s armor would start with the laughable moniker), but their latest record does well to ensure that everyone and their mother to do just that.